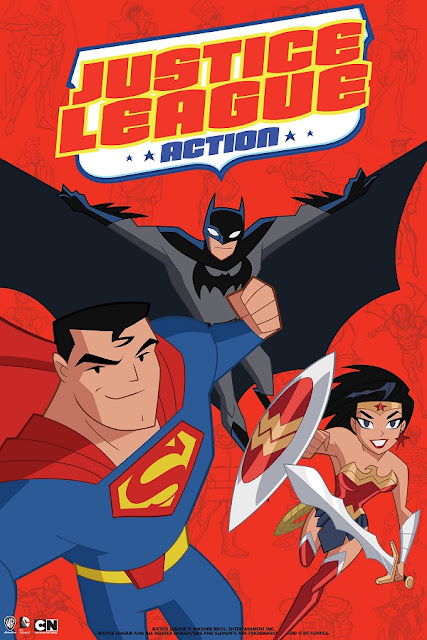 I was a huge fan of the Batman:The Brave and The Bold cartoon series on Cartoon Network. The mix of action and comedy along with it being a who's who of  DC Heroes both well know and obscure made it such a fun romp of a cartoon. After three awesome seasons it was cancelled. Nothing afterwards filled its place. While there was quality series afterwards none of them scratched that itch for light-hearted action. After seeing this trailer for Justice League: Action, it looks like my prayers have been answered.

Of course we have the DC Trinity represented, it can't be a Justice League cartoon without Batman, Wonder Woman and Superman. Their costumes look to be reflecting some of the changes in the comic books which is fine. However there are sooo many other characters that I'm happy to see being included, like Firestorm, Martian Manhunter, Plastic Man, Lobo and Space Cabbie, YEAH! SPACE CABBIE!! DC Comics has so many awesomely goofy and campy characters in their stable. They need to leverage this more often both in print and onscreen. Plus voice talent fans who listen carefully will realize that Kevin Conroy and Mark Hamill are back as Batman and Joker respectively. I know this is aimed at kids, but I'm excited for it and hopefully my kids will dig this cartoon too. If they don't, well then I'll be watching it alone while eating my Cap'n Crunch.

On another level, though I'm enjoying DC's comic books a bit more now. I still wish they'd inject a more of this fun and some of the comic book camp back into their books. A balance can be struck where fun can be included without making the books childish. They have so many resources available to them that aren't being used. Marvel seems to be able to bring back odd concepts and retool them with great success. Whoever thought that Howard the Duck would be getting his own comic series ever again? Or Devil Dinosaur for that matter.

Anyway on to the trailer, enjoy it. More info about the show can be found on DC Comics site: