Skip to main content
Labels
Posted by The House of Bella and Baron July 22, 2016 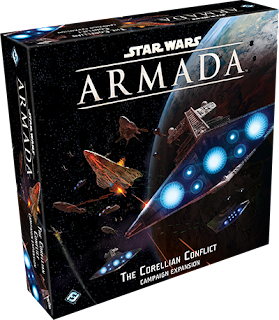 A shift in loyalty may be occurring.

In posts a couple weeks back I expounded upon my love of Fantasy Flight Game’s, Star Wars X-Wing in an article about Star War: Armada. If you are not familiar with Star Wars: X-Wing it’s a tactical ship to ship combat game in which players take control of powerful Rebel X-Wings and nimble Imperial TIE Fighters, facing them against each other in fast-paced space combat. Featuring stunningly detailed and painted miniatures, X-Wing recreates Star Wars’ exciting space battles. ** It’s dog fighting in the Star Wars Galaxy.

I love Star Wars: X-Wing and have invested, literally, well over a thousand dollars in expansions and accessories over many years. So, when Star War: Armada was released I found it hard to adopt the new game. I had invested so much in Star Wars: X-Wing already. However, this is not to say I am not a fan of Star Wars: Armada or its next level of Star Wars Galaxy spaceship combat. Star Wars: Armada, if you don’t know is an epic two-player game of tactical fleet battles in the Star Wars universe where massive Star Destroyers fly to battle against Rebel Corvettes and Frigates. Where banks of turbo-lasers unleash torrential volleys of fire against squadrons of X-Wing and TIEs. As Rebel and Imperial fleets collide, it is your job to issue the commands that will decide the course of battle and, ultimately, the fate of the galaxy. ** It’s capital ship combat in the Star Wars Galaxy.

My personal challenges have been finding folks to play X-Wing with. A lot of the game stores in the area hold playtime events, but are held during days and times I am unavailable; I have one go-to best pal who plays with me when our schedules line up, but adulting get’s in the way. I also have other gaming hobbies that eat into an already limited schedule for tomfoolery and fun, so the windows of opportunity are few and far between. So, while I have heavily invested in Star Wars: X-Wing I do not get to play as much as I’d like. Yet, my love for the game has been unwavering…until now.

This is why the announcement today from Fantasy Flight Games introducing The Corellian Conflict Campaign Expansion set is so exciting, because it bring the ideas of teams into the fold in a officially sanctioned way. Granted, it may not be the way in which my geek buddies and I incorporated teams into our play exactly, but it embraces what we had already discovered: The more the merrier.

In The Corellian Conflict Campaign Expansion you will explore the dramatic events of The Corellian Conflict and your struggles for the Corellian Sector. This will play out over multiple campaign turns during which you and your teammates meet your foes in games of Star Wars: Armada*. This kind of campaign of multiple battles, and a scaffolding approach to long-term gameplay is a good fit for the Star Wars: Armada platform. It embraces the nuances of complexity that can often get lost in Star Wars: X-Wing, which often turns into a slug-fest and, in my opinion is best for one-shot matches rather than campaign or scenario based play, components that have actually served the Star Wars: Armada experience well.

When Star Wars: Armada was first released I immediately labeled it as, “Star Wars: X-Wing, but for the big ships.” I was proved wrong and my opinion of the game has been continually evolved. I think Fantasy Flight Games is embracing what the players of Star Wars: Armada had already discovered on their own. Of the two games it’s suited best to scale up the involvedness players have in attempting to achieve victory, often in more intricate ways than simply destroying your opponent’s assets. It has also created an environment that allows for long term commitment, providing a game experience that builds upon the last. And by having more stake holders involved the incentives are raised proportional.

I will always love Star Wars: X-Wing, but where as my experience has been Star Wars X-Wing being a series of boxing matches with no long term stakes (this is not a negative) Star Wars: Armada has gravitas that feels more epic. It appears Fantasy Flight Games is embracing this.

Check out The Corellian Conflict Campaign Expansion and see if you don’t agree.