It's been over a year since I've been to a big convention but it felt really good  that the first convention I went to this year was in my hometown of Washington, DC. Awesome Con is a relatively new convention with this being its third year. For one reason or another I hadn't been to Awesome Con in its first couple of years.  However going into this con this year I would have assumed that this event had been going on for a decade. The level of organization, the quality of the signage, and the friendliness of the staff was really on par with other major conventions. The polish and detail orientation that makes a convention experience so smooth and enjoyable for the attendees.

Awesome Con is well named as it doesn't refer to itself as a comic book convention. This event is truly a gathering of what is awesome in all media from television to movies, comic books to novels, published & accomplished artists and local/regional artists. The exhibition floor really had a great representation of vendors and artists that reflected all areas of geek culture.


While I'm not at these shows to gather autographs the variety of media guest was also impressive, especially for a show that's only three years old. William Shatner, George Takei, Kristin Bauer, Sean Astin and John Rhys-Davies are only a few names of the celebrities that spent their weekend in Washington DC for this event. Fans of Star Trek, Dr. Who, Buffy, True Blood, Lord of the Rings, Once Upon A Time all had someone for them to meet and get an autograph from.

While I had enjoyed myself the first day walking the exhibition floor, spending sometime in the console gaming room and sitting in on a panel. The second day was a real test for this convention, the day I brought along my 9 year old son. He was instantly in love with this convention. He had a chance to check out the table top gaming room watching some of the card games going on for a bit. But the exhibition floor really got him excited. There was so much going on he didn't know where to turn. He was torn between wanting to do some of the many kids activities and programming or diving head first into the dollar comic bins or Pokemon singles boxes. He took a nap as soon as he hit the backseat of the car on our drive home.

This is a great time of year to be in the city so I hope Awesome Con sticks to having cons at this time of the year. I honestly don't have a negative word to say about the show or its venue. The Walter E. Washington Convention Center is close to the Gallery Place/Chinatown area. So for someone like me who has filled his lifetime quota of convention center food, there are plenty of places close by to duck out of the convention to grab a quick bite to eat.

A part of me wonders if participation by both exhibitors and attendees would've been higher if the following weekend there wasn't the Special Edition NYC event going on up I-95 in Manhattan. This is a passing thought that I heard a couple times from some vendors, but overall all the vendors and exhibitors were impressed and please by the event when I discussed it with them.

My final conclusion for Awesome Con is that is definitely worth the time. When you come away from a convention already planning how you can spend your time the next year then you know its a good one. Its already reached the level of being convention where you can't do everything. I know next year I'm going to take the time attend a few more panels and maybe spend a little more time in the table top gaming room. Which might mean me taking some time go on Friday to get the full three day experience.

Washington DC has a legitimate convention for sci-fi/comics/art/geek fans in Awesome Con. Ben Penrod, Steve Anderson, Paul & Jess Petyo, Becky Mezzanotte and all other folks who gave their time to make this event happen have the gratitude of a lot of people in the Mid-Atlantic for bringing this show to the area. 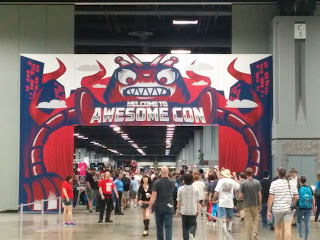