Skip to main content
Labels
Posted by droracle May 07, 2015 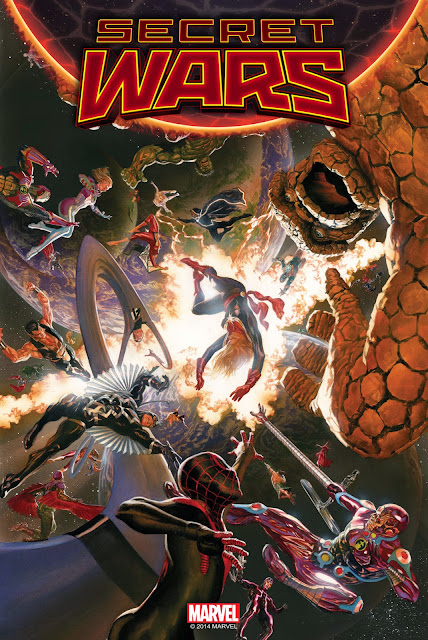 
After a string of what I considered rather disappointing big summer event stories that didn't have the last impact that big event stories should, Marvel is now putting out one hell of an event comic. With Jonathan Hickman at the helm this event has been a couple years in the making starting in the pages of the Avengers and The New Avengers as the teams have dealt with the incursions of to other universes as the multiverse goes through the death throws of collapsing on itself. I personally love it when an author gets to play the long game and successfully bring the readers to this kind of pay off. In comics there isn't always the guarantee that this will be the case. Many times authors have had grand plans only to see them unfinished or left trailing in another direction with the changes of the creative staff or editors.

Secret Wars first issue opens up where we left off in the Avengers' series with The Marvel Universe and The Ultimate Universe on a collision course with both realities heroes fighting it out while brain trusts of both realities are doing the real work that matters behind the scenes.

Despite some of the awesome scenes of Marvel heroes tearing into Ultimate Iron Man's weaponry and Ultimate Nick Fury and Hawkeye going against the Hulk, She-Hulk and Colossus. There is such an overall feeling of hopelessness and finality to this issue the weight of this event actually feels like it has some heft.

I've also enjoyed the usage of Doctor Doom and Molecule Man. These two played such a big part of the original Secret Wars limited series that I read and loved as a kid in the mid 80's, it is fitting and very satisfying to have them back in the thick of this new Secret Wars title.

Hickman has been one of my favorite Marvel writers starting from his time on the Fantastic Four and on through his work on the Avengers' titles. Esad Ribic is pretty strong through, he is definitely an artist who excels at drawing these stories with an overwhelming amount of characters. He was a great choice for this series.

While the series builds upon about 3 years of comics leading to this point, I still think this limited series is accessible to those without all the additional background. New readers will be able to figure fairly quickly what is going and be able to move on and enjoy this title and understand where its leading to.