Rebels is a period piece set in 1775 following the first militia that was formed to protect the colonists from the British Empire. Rebels follows the story of the militia’s leader Seth Abbot and a group of his childhood friends. The book delivers a well-paced balance of story line and action, with art depicting settings rarely seen in a today’s modern comics. If you are a fan of the revolutionary war and the AMC television show Turn, this might be the series you have been seeking. 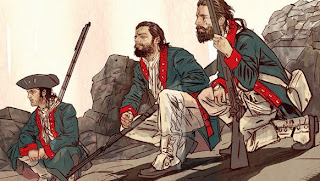