Michael Biehn has confirmed he will reprise the role of Corporal Hicks for the upcoming Neil Blomkamp's “Aliens” project. Earlier this month, it was announced that Sigourney Weaver would be back playing Ripley. There is so much speculation surrounding this project, will it pick off were the critically acclaimed "Aliens" sequel left off, erasing Alien 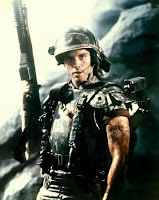 3&4? Neil Blomkamp talent is evident and getting his take to continue the Alien story line will be nothing but interesting. image courtesy of http://avp.wikia.com/wiki/Dwayne_Hicks
Labels: aliens film movies science fiction