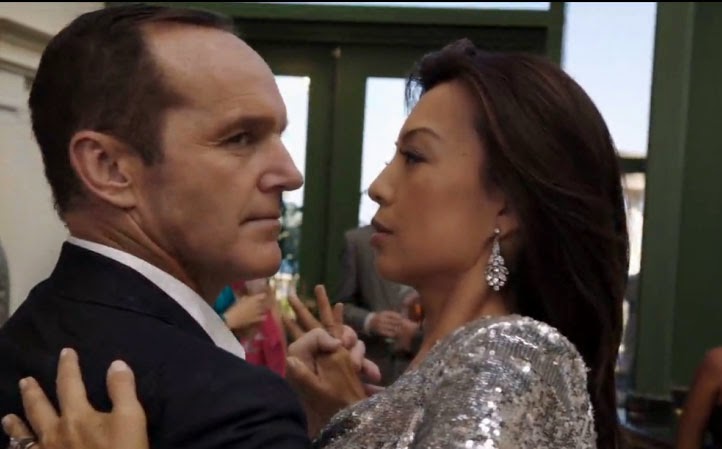 Tuesday nights have quickly become my nights for dedicated TV time. The comic book fun to be had in the TV network programming on this night is a great lead-in to new comic book Wednesday the day after for me. I stayed with Agents of S.H.I.E.L.D. through the slow times and the good times in its first season and this second season just feels like the best reward for sticking with the show. Everything I wanted out of this series has been dialed up. The first few episodes were strong by going all in with real super villain comic book characters having heavies like the Absorbing Man and Blizzard in the mix against the S.H.I.E.L.D. agents. With Episode 4 we get a good dose of spy action and some amazing fight sequences, the best we've seen in this series yet.

Through the use of a digital face mask, tech that we first saw used by the Black Widow in the Captain America: Winter Soldier film earlier this year, Agent 33 is able to take on the identity of Agent May to infiltrate S.H.I.E.L.D.  temporarily. Long enough to get some valuable information about the status of the vigilante spy group since its was officially disbanded after the Hydra debacle and cause some trouble for the agents aboard the command center plane, The Bus. The high point in this episode is the confrontation between Agent May amd the. False Agent May. Giving viewers a fight scene with incredibly strong choreography.

The strong acting skills of Ming-Na Wen were also on display. It was great to see Wen go beyond the rather stoic and all business persona of Agent May, by having to put on a different personality for her cover identity while on the mission for this episode. We also saw some other dimensions to her Agent May character in her interactions with Coulson and how she wanted to deal with his health situation if matters got worse.

We also get to see a little bit into the continued movements of Hydra and a few more tidbits on the odd alien looking writings that Coulson been creating.

Overall this was another strong episode in what has been a good season so far. It's shame they haven't been able to retain viewers