Secret Wars to be Marvel's Next Big Comic Event in 2015 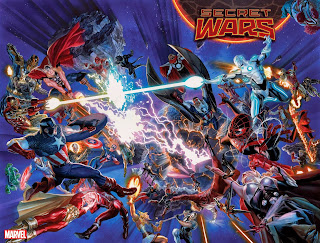 Everything old is new again and redone even cooler. Marvel is returning to another version of the Secret Wars with heroes from different timelines and realities coming together to battle. At least that's what it looks like in this awesome Alex Ross poster advertising the event. You could spend the morning dissecting this poster to figure who is who.

Secret Wars was announced at 2014 New York Comic Con, going on right now in Manhattan. Details are slim on this big event slated for Marvel heroes in 2015. Jonathan Hickman will be writing and Esad Ribic will handling the artwork. In the meantime we have this great promo piece to chew on for awhile.

An interesting fact already picked up by others reporting this. We don't see any members of the Fantastic Four or the X-Men in this image, and we only see the Ultimate Spider-Man Miles Morales, no Peter Parker to be found. However we do have all kinds of different Iron Men and Captain Americas. As well as Obnoxio the Clown in the top right corner! Real Marvel Zombies will remember Obnoxio from the old Marvel humor mag, Crazy.
Labels: Avengers Captain America Iron Man Marvel Comics Obnoxio the Clown Secret Wars Thor