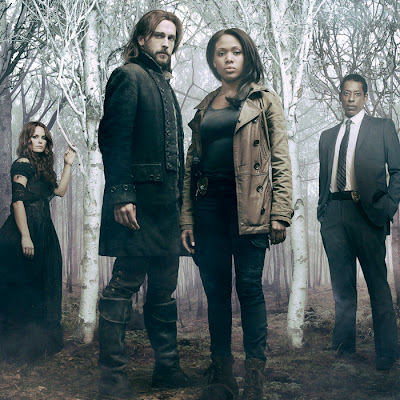 Usually Monday television programming gets watched on a time delay via my DVR since I'm a regular Monday night football viewer this time of year. After the disappointments of Sunday, I wasn't really in the mood for football. I'd also remembered the commercials for the new Sleepy Hollow series that debuted this Monday night on the Fox Network. I'm have a soft spot for the original legend and was curious to see how they were going to parlay this into an ongoing series.

I'm happy to say that this pilot episode did not disappoint. We have both Ichabod Crane played by Tom Mison and his nemesis the Headless Horseman essentially rising from dead 250 years after their deaths during the Revolutionary War in the Sleepy Hollow of the 21st century. Right out of the chute the Horseman is on a killing spree by beheading of course. Officer Abbie Mills finds herself picking Crane's mind to find out more about the Horseman while she's wrestling with this new reality of horse riding demons and time displaced Englishmen.

To bring up the ante to Biblical level stakes it turns out this headless horseman is one of the Four Horsemen of the Apocalypse, Death to be exact. Meanwhile since before the birth of our nation there have been secret societies, covens of individuals representing good and evil, still operating behind the public eye, fighting their own secret war trying to aid this coming Apocalypse or preventing it from happening.

I'm guessing this is going to fall into the pattern of a monster/mystery of the week, with the larger villains and the save the world storyline being an ongoing constant. Meanwhile we'll chuckle as Mr. Crane adjusts to life in the 21st century. I'm fine with that. I like these characters, I love the inclusion of American history and myth being melded into this storyline. This pilot was a strong start for this program to grow from. I'm looking forward to next week.