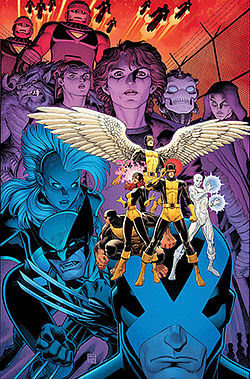 For the first time in a long while I've actually been "plugged-in" enough with what is going on with the X-Men that I could dive into this special X-Men event without the feeling that I needed to do some homework to figure out the current status of the many mutant teams. This first issue of Battle of the Atoms is dealing with a topic that is being explored in other Marvel titles, specifically the fragility of the time stream and how it is being endangered by the abuse its been dealt by Marvel's heroes as of late. For those not in the know, the original X-Men have been pulled through to the present day by the Beast so that they may see their future and find a way to avoid it. This temporary visit has become more permanent since the young X-Men flatly refused to return to their time, fearing everything they saw would be wiped from their memories by Professor X. In the middle of this issue during a combat situation with a very powerful new mutant the dangers of having these time displaced heroes active in the modern world becomes increasingly apparent. Just as the Original X-Men argue with today's X-Men teams about their fate, a third team of X-Men from a rather dark future show up with warnings of their own.

I'm a huge fan of Frank Cho, and he did a great job on this issue. Stories with so many different characters isn't easy to get done on schedule but Mr. Cho cranked out a great issue. The cover by Art Adams was just a cherry on this comic book sundae for me artistically. For the most part I've enjoyed what Bendis has brought to Marvel and the X-Men. An X-Men event story with heavy doses of time travel just seems like a classic set-up that I'm looking forward to reading more of. In the past the X-Men have had some of the best time travel/alternate future stories that going to this well again seems appropriate for a mini series that is helping to celebrate the 50th anniversary of the X-Men.

Four and a half stars out of five, fun read, great artwork,