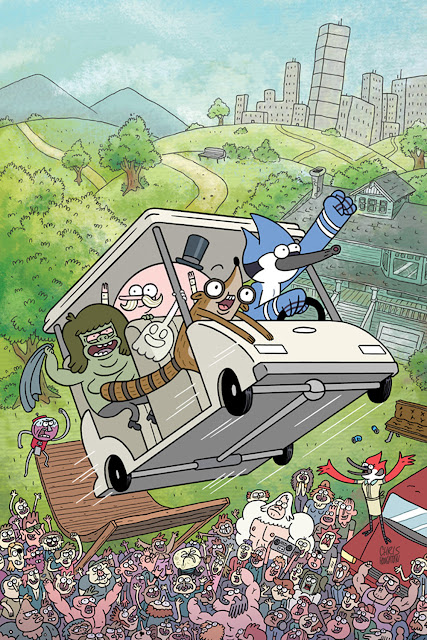 BOOM Studios through its KaBOOM imprint has produced some of my favorite all-ages books of late. Adventure Time and its off-shoot mini-series are comics that my son and I enjoy a great deal. Often I enjoy the comics even more than the cartoon on television. The Regular Show comic will be another title to add to their growing list of all ages books. Judging from the release below they are going to give this title the same high level of talent that they have to their other books. Fans of the Regular Show and I know there are many, should be thrilled. See the official release below:

Join Mordecai, a blue jay and Rigby, a raccoon, a couple of best bros in their twenties just tryin’ to chill for a bit, man. But when you’re livin’ in as crazy a world as they are, no day can be called...regular!

“It's exciting to be able to work on this comic as I am a fan of the show. Probably the funnest part is going back over the episodes again for inspiration (and just enjoying them also)," commented writer Green, "Plenty of ideas popping up just working on writing them down and getting the voices of each character just right. That is important, especially with this project."
REGULAR SHOW #1 ships in April with main covers by Nick Edwards (ADVENTURE TIME), Nathan Fox (X-MEN: SECOND COMING), Phil McAndrew (ADVENTURE TIME, BRAVEST WARRIORS), John Allison (ADVENTURE TIME: MARCELINE AND THE SCREAM QUEENS), Noelle Stevenson (ADVENTURE TIME: FIONNA & CAKE) and Chuck BB (CTHULHU TALES, BCBG). Ask your retailer about the pre-order variant by Chris Houghton (ADVENTURE TIME, REED GUNTHER) and the incentive variant by Dustin Nguyen (BATMAN, L’IL GOTHAM)! Additionally, a commemorative boxed set of all six main covers will be available for collectors.

"I’m really excited to see Regular Show in comic form," added creator Quintel. "Can’t wait to see what K.C. Green does with it. As someone who also only has two letters for a first name, I’m sure he’s going to make it awesome."