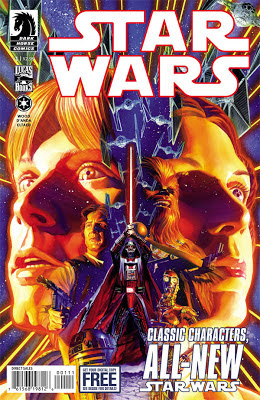 Star Wars, Issue #1
Dark Horse Comics
Writer: Brian Wood Artist:Carlos D'Anda
Dark Horse has done it again. Reading this first issue of the new Star Wars ongoing series I felt like I did when I read Dark Empire, I felt like I was getting something back that had been missing. This week, Dark Horse gave me back  MY Star Wars. I know some of you are saying that if I want Star Wars there's plenty of it out there to read and watch. Try as I might, I don't really dig the stories of the Old Republic or the ancient history of Jedi and Sith. I don't even get sucked into the Clone Wars. For me Star Wars is the Millenium Falcon and X-Wing fighters, its Luke, Han, Leia and Chewie teaming up with the rag tag Rebellion against unbeatable odds. And that's what this Star Wars series is giving me.

Star Wars picks up with the heroes from the Battle of the Yavin right after Episode IV: Star Wars. Luke doesn't know Leia is his sister, Han and Chewie are still figuring out how to operate with a bounty on their heads, Darth Vader is licking his wounds and suffering a major blow to his pride after being dealt such a horrible defeat at the hands of the Rebellion and a young man with the last name Skywalker. The art work is on target, not getting bogged down with making acting portraits of the actors but still making the characters instantly recognizable. Darth Vader and Stormtroopers look absolutely bad ass while still staying true to the costume designs. I'm not going to spoil the story, not that anything earth shattering happens in this first issue its just that I want it to be as new and unspoiled for you as it was for me. Brian Wood obviously knows the characters very well, he writes their dialog perfect getting the voices of the lead personas dead on.

Out of all the things I collect and that I'm a fan of, Star Wars is the one thing I've probably loved and enjoyed the longest. For me before comic book superheroes and hobbits there was Star Wars. I mean as a kid I thought Christopher Reeve as Superman was cool don't get me wrong and of course the Super Friends rocked but in the end they were just another saturday morning cartoon and I didn't read comic books at the time. No, when I saw The Empire Strikes Back something really clicked for me. As I remember it I saw Empire Strikes Back in the theaters in 1980 with my Dad, Mom and little brother. Later on Dad would take us to another less swank theatre to see the Episode IV on the big screen. After seeing these films I was locked in.

Later on I really discovered comic books and the Star Wars comic book from Marvel comics was the one I enjoyed the most. I'd clamor for anything Star Wars, whether it was the BBC broadcast of the Star Wars story, photo books with movie stills, and of course the toys and video games. I loved following the adventures of Luke Skywalker, Han Solo and Chewbacca versus Darth Vader and his legions of stormtroopers. That was and is Star Wars to me! Reading Star Wars number one, as corny as it sounds made me feel like a kid again. I was actually excited to read a new story about Luke and Leia, the young Luke and Leia that loved as a kid. So that's all I'm going to say. For my school of Star Wars fans this comic should feel like a gift.