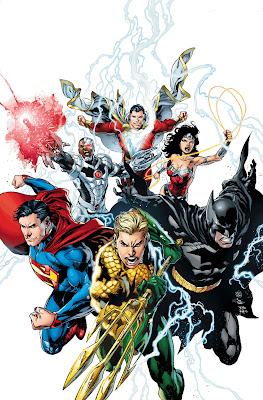 Even though I haven't reviewed this title I've followed it regularly since its first issue in 2011 with the rest of The New 52. As I've read the main story I'll admit this isn't my favorite incarnation of the Justice League. By all rights it should be I mean we have the big hitters all the A List in the team. I guess I find the title to be too heavy, I mean the light moments are few and far between. This coming from a guy whose enjoyed the 80's JLI series from Giffen and DeMatheis so maybe I'm not the best judge. But I still remember even some light moments with Plastic Man on the team when it was written by Grant Morrison. I guess I enjoy the team books when I see the friendships develop and interaction seems more natural. After 15 issues aside from the blossoming romance between Superman and Wonder Woman there doesn't seem to be much comradeship to be had. The overall story seems kinda cool even if we have been down this road before over in the Marvel universe where it seems Namor and Atlantis has a bone to pick with the surface world from some perceived attack every 5 years or so. After 15 issues I'd kinda like to see Cyborg to be less mopey as well. I mean come on man, you are a super Cyborg!! I loved the artwork. Reis and Prado did a great job with this book.

Normally I'd be perturbed that this comic had to sacrifice some pages to a short story. However the ongoing origin story of Shazam (former known as Captain Marvel to long time fans) is a lot of fun. I'm a huge fan of Gary Frank and I think this is some of his best work yet. The pacing in this story line I think is on target with every issue we see progression with Billy Batson as he gains his powers and comes to understand them. Seeing how writers handle the situation of a child gaining adulthood and super powers all at once is usually a lot of fun and this is no exception to that. At the end of this chapter we see that Shazam's time to play is about to come to a rather abrupt end as he has to face the Black Adam. More often than not I find I'm more excited for this secondary storyline than I am for the main story of the title. I don't know if I'll be disappointed or excited when/if Shazam joins the roster of the Justice League.

At the of end of the day, this a good jumping on point with the beginning of the Throne of Atlantis storyline. A new reader won't be that confused since the characters are all pretty familiar and established.

I give the book a solid 3 out of 5 lightening bolts.