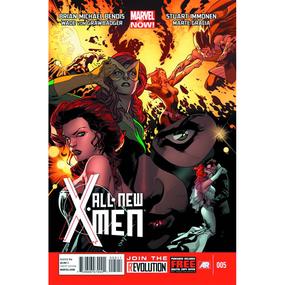 2013 in the Marvel Universe. Professor X is dead at the hands of his former student Cyclops, new mutants are popping up all over the world, Cyclops is working with Magneto and Emma Frost to form a new school for these mutants as a part of a new mutant revolution, meanwhile the X-Men are desperate to stop him somehow. So Hank McCoy while fighting against the instability of his mutation, goes back in time and brings back the original X-Men from the 1960's hoping to use them to help this situation in someway thinking the current Cyclops will remind himself of Xavier's mission by seeing his teenage self. That's the set-up. So far the teenage X-Men have already encountered Cyclops revolutionaries, Hank McCoy is working to save his future self's life, and a very alarmed Jean Grey is coming to grips with her troubling destiny.

I'm not a huge X-Men follower and I run hot and cold on Bendis, but I'm enjoying these first issues of this series more than I've enjoyed the X-Men in a long time. X-Men titles have never been those that I collected steadily, but I had friends who did or I'd pick up a few issues at a time to see what was going on at a convention. This is quickly beoming my favorite title of this entire Marvel NOW effort that Marvel is in the middle of. I'm absolutely loving the dynamic between the original teenage selves of these X-Men with the modern team and for some their modern selves. The developments that occurred in this issue have me locked in for awhile for  two reasons.

First reason, Hank McCoy/The Beast, has been the driving force behind this story. He's a character that I enjoy a great deal having him in and out of the Avengers over the years. In this issue we see The Beast's mutation evolve to a new level which doesn't make him look like a blue lion man. I personally hated the feline look that the Beast had been given, this new look for him is awesome. A change I was very happy to see. It honestly doesn't take much to make me happy, with that change Bendis checked a box in my comic book wish list.

Second and more importantly, the return of Jean Grey!! I don't care how this was accomplished. In this issue Jean made it clear that she and her X-Men were staying this time to accomplish what they need to bring Xavier's dream to fruition and stop the Modern Cyclops. A Marvel Universe with Jean Grey/Marvel Girl in it is a much richer place. Her return is long overdue.

Stuart Immomen is showing a strong effort on this book, inking and colors are beautiful as well. I still have some issues with Bendis' pacing over these past 5 issues. But I'm coming to grips slowly that this style is becoming the norm in comics now. Its annoyingly transparent to me that is setting up a trade paper back with this glacial pacing in a book. I just remember some huge events in comics only taking place over a couple of issues or ONE giant size book. Okay this review isn't the place for my old man rant on the state of modern storytelling in comics.