IDW: Announcing The Hollows, by Chris Ryall and Sam Kieth

IDW has announced a new creator own four issue mini-series created by Chris Ryall and Sam Kieth, called The Hollows for release in December 2012. Sam Kieth's unique style always has a dark, whimsy that I find so engaging and i find his style always really excels when its characters of his own creation that are being illustrated. The story sounds very interesting, but I'd honestly buy this series for the artwork alone. Here is the description of the book from the IDW Press Release.


To combat the catastrophic death of a decaying Japan, survivors create genetically engineered supertrees—wooden leviathans capable of supporting entire cities suspended above the radioactive wastes below. Traveling via jetpacks to stay above the toxic air below, the survivors must also band together against the Hollows, irradiated husks whose humanity has been supplanted by an unquenchable desire to consume human energy!

“The Hollows began as a more straightforward tale,” said Chris Ryall, also IDW’s Chief Creative Officer/Editor-in-Chief, “until Sam and I remembered that neither of us really tell straightforward tales. So the desolate setting for the story is really just the backdrop for a more personal tale of love, loss, redemption, faith, flight, and past versus future, all wrapped up and bound to the archaic flying suit of our protagonist, a beleaguered scientist/explorer named Kobayashi who ventures down from his city-state and finds something entirely unexpected. Along with a little scene- and heart-stealing creature called Urp, too.”

A world created from the mind of Sam Kieth is a special thing. I remember his work fondly from The Maxx and Arkham Asylum. If you aren't familiar with Sam Kieth look for issues of the Maxx in the back issue boxes at your local convention or comic book store.I'm looking forward to this new series, so at the very least I'm going to pick up the first issue. 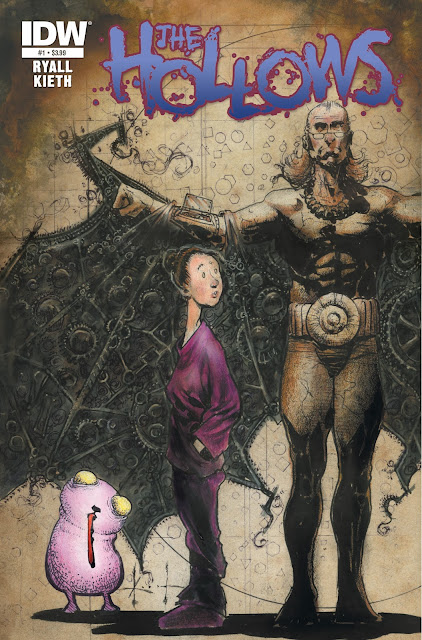