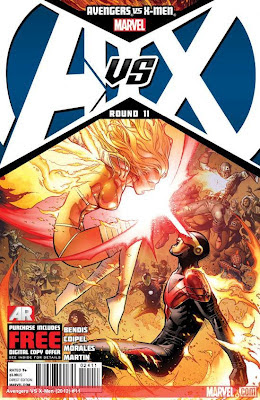 With all the buzz going on about this issue of the AvX event series, I had to read this as soon as I could.  So it was number one my list to read on the train ride home this afternoon. Without a doubt this is the issue where shit got real. I mean things have been over the top from issue to issue with the Power of the Phoenix being concentrated in fewer and fewer hosts in Scott Summers/Cyclops group. With issue 11, the power resides within only two, Emma Frost and Summers. As the forces behind the Phoenix grow the resistance mounted against them strengthens as the ranks of the Avengers swell with the mutant heroes who now realize the Cyclops is out of control. In a cool scene with two of my favorite Marvel characters Captain America enlists the Hulk to aid the cause as well.

This leads up to a Heeeyuge battle as one would expect towards the end of this mini series with Avengers, Defenders, and X-men of every variety going up against Emma Frost and Cyclops. I love the artwork being put into this issue by Olivier Coipel and Mark Morales. Oliver Coipel is high on the list of my favorite artists after discovering his work in the pages of Thor he hasn't disappointed me yet. Seeing his name on the cover of this book had me smiling when plucking it off the shelf.

The raw power of the Phoenix is depicted more vividly then I ever remember it in previous stories regarding it. When this power is sent against the resistance there is at least one casualty. Cyclops in his rage appears to kill Professor X. Professor X, Scarlet Witch and Magneto headed up the attack on the Phoenix Hosts. Magneto was dispatched very quickly so I'm not sure of his ultimate fate. However the death of Xavier by someone who considered a son and someone he groomed to bear the torch of his legacy had a great deal of impact. And its death that if allowed to stand (we know how death often goes in comics) that could have major repercussions in the Marvel Universe. This event is directly leading to the Marvel NOW era, judging by the changes shown by Marvel Charles Xavier's death will be one that won't be undone anytime soon.

I'd initially dismissed this story line as silly, and nothing more than a video game concept brought to a comic book. I'm taking those comments back, I think the simplistic title for this event series doesn't really do just to the events occurring within the books. I will enjoy reading this collected in a trade paperback. But if you don't want to wait, go to some of the conventions still going on this year and pick them up in the current back issue boxes at a considerable discount, at least some of the issues popped up in the boxes on some dealer tables at Baltimore Comic Con while i was searching around.