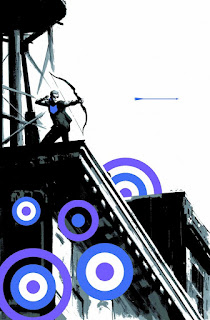 Finally Clint Barton, Hawkeye, gets his own series, this long time member of the Avengers and once leader of the West Coast Avengers has long been active in the Marvel Universe, aside from those few years there when he died (but as with all Marvel characters he got better). Hawkeye has always been a brash outspoken  character, many times clashing with team members and team leaders. More often than not the Hawkeye stories I've read have been Avengers stories. Matt Fraction in this opening story takes the Avengers out of the picture. This isn't an Avengers story focusing on Hawkeye, this is completely a moment in Hawkeye's life outside of the Avengers. He doesn't even appear in costume that I remember.

At the end of the day Clint Barton doesn't have any powers, he's a very skilled marksman and combatant, but still just a human being who bruises and bleeds as easy as the rest of us. In this story line he definitely takes his lumps while dealing with a shady landlord that runs the building Clint lives in. This is a character we're used to seeing in big planet threatening or at least city-wide dangerous situations. Seeing him go up against what amounts to a neighborhood bully is a very cool change of pace and really gives newcomers to the character a chance to understand his personality.

Matt Fraction does a great job providing the voice for this character, regardless of whether he wore a costume or not, there was no doubt this man was Hawkeye. David Aja's artwork was perfect for setting up the environment for this story to play out. This was a street-level story and the artwork conveyed this beautifully. Also major props to Matt Hollingsworth, the coloring job he did married so well with David Aja's lines, a perfect palette to set the mood for this tale.

Whether you are a superhero fan or not, this is a well done book that deserves a look.
Labels: comic books comic reviews David Aja Hawkeye Marvel Comics Matt Fraction superheroes