Comic Book Review: He-Man And The Masters Of The Universe #1, DC Comics 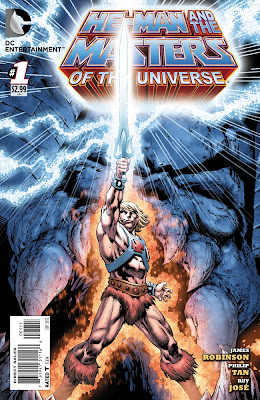 He-Man is a toy franchise that I've always had a soft spot for. It was one of the cartoons I looked forward to viewing after school, the characters were colorful and imaginative and the stories were fun. Mattel has tried to restart the line of toys with various degrees of success. Currently high end versions of the action figures are based upon the original toy designs at Mattycollector.com, Mattel's collector toy online store.

Seeing this comic book on the stands was a pleasant surprise for me last week and I scooped it up without any hesitation. The beginning frames of the story already had me curious. The story opens with Adam, He-man's alter-ego as a woodsman chopping logs in the wilderness. Any fan of this franchise knows this ain't right from the get go. Adam is a Prince and his ailing father's addled memories of being royalty maybe a clearer memory of the truth than Adam knows.

Adam is motivated to leave his home when he encounters Zoar the eagle and starts to have vague memories of his own coming in his dreams. It doesn't take long before leaving that Adam encounters my favorite of the Skeletor henchmen, Beastman. Beastman's appearance just brings up more questions on what is going on. Why doesn't Adam remember who he is supposed to be? How did Skeletor manage this kind of hocus pocus. Where are the rest of Adam's allies?

James Robinson has me hooked and Phillip Tan's interpretations of the Masters of the Universe is solid, not over stylized and true to the original character designs that I remembered from the 80's. After reading this I'm tempted to pop in my He-man animated series DVD, the last one that was shown on Cartoon Network.

Even if you aren't a fan of the original material. This is a good comic book and its always cool to get into a story from the beginning instead of waiting for a jumping on point later. And if you are a fan, pick this up if its still on the stands or make it a priority when trolling the dealer aisles at conventions this summer.