For the female Doctor Who fans, and I know more than a few, a line of t-shirts has been launched so you can show your stripes as Dr. Who fangirls. BBC Worldwide teamed up with Her Universe to the line of clothes. Her Universe also has a great line of Star Wars clothing. Personally I think its cool to see more licensed t-shirts that are more feminine designs instead of just slapping the print from a guys shirt on to a women's shirt. Here are some of the samples below: 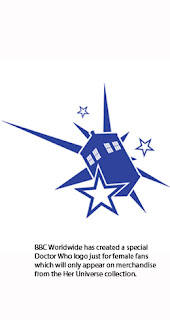