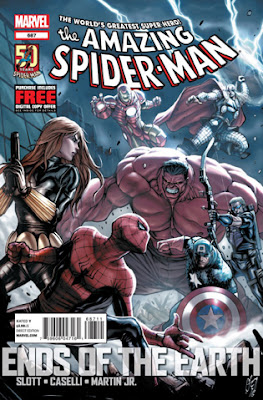 As much as I've enjoyed Marvel's big summer Avengers VS. X-Men for all its size and stupidity, the big story for me at Marvel this summer has been Spider-Man's Ends Of The Earth storyline. The story has been mainly contained to the pages of the Amazing Spider-Man book with a couple special one-shots on the periphery. Issue 687 is where this story ties up and its been a helluva ride. A dying Doctor Octopus has gathered together the Sinister Six including Sandman, Rhino, Mysterio, Electro, and the Chameleon. His scheme is to appear to offer to save the planet through one last grand gesture when in reality his plans amount to one of the most deadly plans Doc Ock has ever cooked up. Spider-Man isn't fooled for second and puts all his chips in from the start to put and end to Doc Ock's.

In this issue Spider-Man, The Silver Sable, and Black Widow have to fight off an Avenger's team that is under the mental control of Doctor Octopus. They must incapacitate their allies in time to stop the evil doctor's grand finale to his evil plot, that would essentially decimate the human race.

Dan Slott's story kept me guessing to how Doc Ock was pulling this off. I mean, yes he's a brilliant evil genius but this plan is on a Doctor Doom level of horrible. Slott wrote the individual members of the Sinister Six brilliantly in my opinion. He writes these characters giving great attention to their individual characteristics, their history and back story instead of just making them super powered thugs. The Sinister Six often times seemed like one of the more powerful gatherings of villains to me, so its really cool to see them going toe to toe with the Avengers with stakes that effect entire world. Dan Slott has repeatedly shown he has a firm grasp on the Peter Parker/Spider-Man character as well as a healthy respect for the depth of his rouges gallery.

Stefano Caselli's artwork is also enjoyable and of exceptional quality and consistency. I feel badly that I'm writing about this story on its final issue. I only hope I motivate you all to find these issues in the back issues at your local comic shop or hunt down the story series at the comic conventions this year. Its a great story that shows Spider-Man at his best.