In the mid-eighties Marvel comics released a 4 issue mini-series for the Transformers, it was a wild ride that even included a guest appearance by Spider-Man and continued to be an ongoing series that lasted until early 90's. I enjoyed this series a lot, while my brother bought some of the first mini series issues, I went on to collect issues of the ongoing series. Fastforward 21 years, the Transformers toyline has gone through a lot of changes, television cartoon series have come and go, Michael Bay's version of the robots in disguise have graced the big screen, there have even been comic book series about the new generations of Transformers. Now in 2012 IDW holds the rights to the Transformers comic book series, and this July they will be continuing the storyline from the original series published by Marvel picking up where the story left off in  1991, even continuing that series numbering by starting the issue count for this new series at issue #81. This is an awesome idea, the Marvel series was one I enjoyed and have read over again. An issues 80.5 will be made available for free on Free Comic Book Day which should help those interested get caught up to speed  Here is the official press release from IDW: 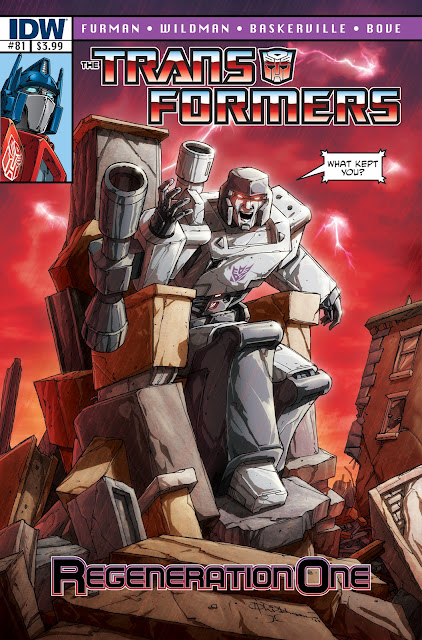 Writer Simon Furman and legendary TRANSFORMERS artist Andrew Wildman are back to their original roots with all-new stories, beginning with the free TRANSFORMERS: REGENERATION ONE #80.5. Starting after 1991’s TRANSFORMERS #80 comic epic conclusion, the free issue picks up as OPTIMUS PRIME watches over a CYBERTRON that hasn't faced MEGATRON for decades. But that peace shudders to an end and dives headlong into July's new series. “The original TRANSFORMERS saga is back—with a vengeance!” exclaimed Furman, “‘epic’ doesn’t cover it!”

“TRANSFORMERS: REGENRATION ONE comic is an important book to TRANSFORMERS fans,” IDW Senior Editor John Barber commented, “and expectations are high. Fortunately Simon, Andrew, and Stephen have only gotten better since the last issue!”

Visit IDWPublishing.com to sign up for updates and learn more about the company and its top-selling books.