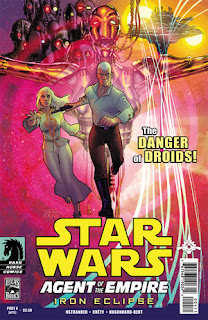 As an adult, Star Wars comic books have not been high on my reading list. As a matter of fact I can't remember the last time I even bought a Star Wars title before I started on with this particular series. I read the Marvel Star Wars series religiously as a kid in the 80's but really fell off after Dark Horse's Dark Empire series in the 90's. While I'm a big fan of the Star Wars movies, my interest in the Old Republic, Clone Wars or world after the films is lukewarm. This is in spite of the fact that I've thought Dark Horse has almost always handled the Star Wars branded materials admirably.


One of my big beefs about Star Wars comics and books I guess is my lack of interest in the Jedi. Yes the Force powers are cool and the lightsabers are beyond bad-ass, but I've always found the scoundrels of the Star Wars universe to be a more colorful and creative cast of characters with much more interesting story potential. The bounty hunters, spies, smugglers, informants, business men, and so forth always seemed to bring more to the table adventure-wise. One of the big things missing in the prequel films for me was a Han Solo type of character. Someone who wasn't a Jedi or Politician, a person who was outside of that world but drawn into it while still dealing with their own issues.


Agent of the Empire - Iron Eclipse follows Jahan Cross, a special agent in the service of the Empire. Basically he's the Star Wars equivalent of James Bond. He's not a Jedi, politician or Sith Lord, he's just a man who has to rely on his wits, strength and occasionally some of his spy tech. Having an adventure where we look at the Empire and Star Wars Universe from this angle already has me interested from the start. So far most of Jahan Cross's time has been spent amongst those in the corporate sector, the upper crust of the Empire's citzens, the titans of industry in the Star Wars universe.

At this point in the book Agent Cross has been accused of two murders and is believed to be dead, while he's really been smuggled off planet by a younger Han Solo and Chewbacca on the Millennium Falcon.  The action is continuous as Jahan runs from the local authorities, runs up against corrupt Imperials, and others with murderous intent. The dialog is better than what you'll find in a lot of Star Wars films. I don't want to delve too deep into the story because with any spy story/mystery its the turns and revelations that make the story so much fun. The writer of this story series, John Ostrander is a pro who has been one of my favorite writers since I followed his work on DC Comics' The Spectre in the 1990s. And the artwork in this books is a fantastic to say the least. While it maybe hard to jump onto this story at issue 4, the back issues are easily found at least they have been for me or just wait for the inevitable trade paper back. This series has been well received so it's easily guessed that more Star Wars Agent of the Empire mini series will be coming our way. I certainly hope so. This series has definitely re-energized my interest in Star Wars comic books.