I know I'm late to the party on this one, but I had to write about it since I found it so exciting. I was out with the family in Lancaster county last weekend and had the opportunity to have an early dinner at the Sonic Drive-In in Harrisburg, PA. The kids as always wanted the "kid's meal" so they could get a toy. I didn't notice any special promotions and didn't give the toys much thought. That is until I saw what was being offered once the meals arrived.

The giveaway was a Tater Tot plushie dressed as HawkGirl. After I saw this I dug into the kids bag and found a checklist with the rest of the Tot Toys all as other DC Superheroes... including my favorite of them all PLASTIC MAN!! But no Batman to be found on the list, interesting...I'm guessing some other chain has the license to produce Batman toys for their restaurants tied into the movie promo deal. 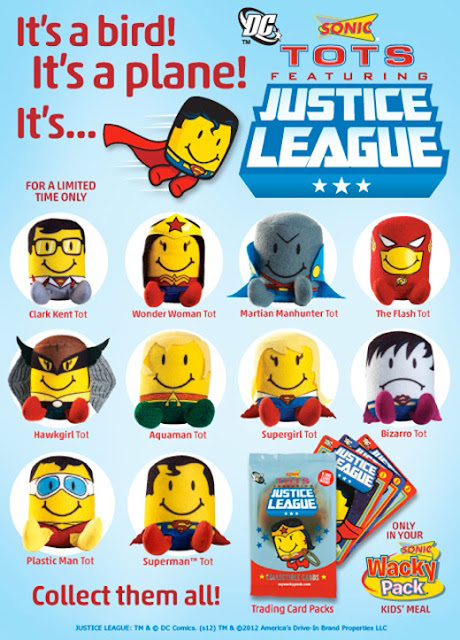 After seeing these I put in an order to for Tot Toys which go for a $1 a pop. This is probably the tail end of this limited time offer. Plastic Man, Martian Manhunter and Bizarro are my top picks from what is offered. Flash, Clark Kent, and Superman are cool too. No matter how you slice it this promotion is full of WIN for fanboys and girls. Martian Manhunter is the fav for both my son and daughter, so we had to get two J'onn J'onzz Tots.