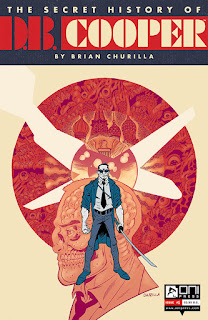 I'm a nerd who watches a lot of the History Channel, A&E, Discovery Channel. I especially gravitate to the shows of the unknown or modern myths & legends. So in the mix with all the UFOs, Bigfoot sightings, and other mysteries D.B. Cooper's legend comes up from time to time and I always find it fascinating.  In late November 1971 Cooper hijacked a plane that had taken off out of Portland and once he had his demands met by the airline, he forced the pilots to take to the air again from the tarmac on at the Seattle/Tacoma airport. Once in the sky, Cooper parachuted from the plane into the wilderness of the Pacific Northwest along with this bag of money,  never to be seen again. No one knew if he'd survived the jump, no one knew even exactly who this guy was aside from the alias he used. This was in the days before cell phone cameras so no photographic evidence that I know of. All that is known is that the mystery man never turned up again and neither did the $200,000 he got from airline. Brian Churilla with this new title, leads readers in a week before the hijacking giving us an idea of  D.B. Cooper's life he lead before his famous crime.

This is really how I like the comic book medium being used. The weird adventure that we are thrown into is a lot of fun. The title character's surreal adventures and the resulting effects of his action are puzzling and fun to read at the same time. I don't want to give out any spoilers. If monsters, weird science, and Cold War era spy games wrapped in a surrealistic package is your thing then this is worth a look.

I came in to this book without knowing Brian Churilla's artwork or writing for that matter. After reading this I'll be looking in back issues and trades for more of his work. I like his art style, he's truly a comic book artist who tells a story with his illustration and framing. He's able to create characters who look like slight caricatures of people we encounter everyday along with amazing monsters and environments. The facial expressions and gestures of his characters are all well executed adding to the store telling so much so that you'd probably be able to follow the gist of this story without any word bubbles at all.

This was a fun read and definitely one I'd suggest for anyone looking for something different.