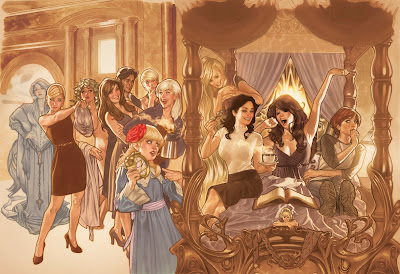 Often when I hear of a spin-off title from a popular series, I approach with caution and reserve judgement. Bill Willingham's Fables is the one exception to this rule. Consistently books that spring from the main Fables series have been enjoyable, and quality books in their own right. From the Jack of Fables series to the Cinderella spy-themed mini series all have been fun reads in my mind. So when I heard that a new series that focused on the female characters of Fables mainly the queens and princesses of storybooks, I was already locked in.

Fables has an amazing track record as being a consistently solid read for years now. Bill Willingham has created a world of storybook characters that have been injected with so much humanity beyond their basic archetype of hero or princess, that its difficult not to get wrapped up into the adventures and trials they encounter. In a world with so many amazing characters its no wonder another title had to be created to tell all the stories that can be told. Fairest will give other writers and artist a chance to tell new stories with these characters outside of the main Fables book.

To kick this series off Fable's creator Bill Willingham does the writing for the first story arc. The main character we follow is Ali Baba as he searches for treasure in the what's left of the war torn world of the Fable characters. He is accompanied by an imp who helps him find the ultimate treasure which just happens to be in a goblin encampment. Meanwhile Ali Baba and the imp are being shadowed by one of the lingering soldiers from Gepetto's army of wooden soldiers.

It's the great mix of fun and adventure that you get in Fables, with amazing artwork by Phil Jimenez. Actually the artwork on this book is just a dream team with Jimenez and Lanning doing the art inside and a wrap-around cover by Adam Hughes featuring all the of the women of Fables. This is how you start a series off! And for $2.99! No one-time price hike for the wrap-around cover or the first issue status. This book is just full of win. If you're a reader who is interest in Fables but afraid of being lost from all the back story, this book offers a great way to jump in and get a taste.

I can't recommend this book enough, I've already read it twice. In a strong week for books, this is the star that shines brightest.