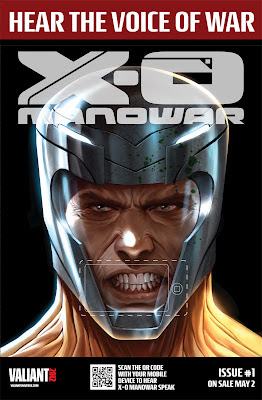 I love a gimmick, especially when it comes to comic book covers. Valiant Comics during its first incarnation in the 90's put out some brilliant cover variants and the new Valiant appears to be following in that tradition. The first issue of X-O Manowar will offer a variant cover that will "talk" to the reader. Apparently if you scan the code with your mobile phone you'll link to a video file with the mouth and voice of the title hero, as you can see in the video at the end of this piece.

Valiant Comics is a company with a great stable of characters and it looks like they have some talented folks in their creative group. If this kind of gimmick, and that's what this is is, grabs some extra attention and makes them stand out a bit on the shelves I'm all for it. With the two major publishers backed by Warner Brothers and Disney, they both have marketing resources well beyond anything a smaller publisher could hope for. This is the kind of inventiveness one needs to try to stand out and re-establish some name recognition for your brand.

I was already onboard to check out X-O Manowar on its release May 2nd. Having Cary Nord as the artist for that book was already enough of a selling point for me. Not to mention I collected the first year of the original X-O Manowar and wouldn't mind revisiting the character and concept. I hope there are plenty more who will also give this book a chance. More quality books on the shelves is a good thing, more publishers competing and producing benefits us all.