DC Comics revealed a character design sketch of the Batman of Earth-2 for the upcoming Earth 2 series and I'm guessing he'll have some appearances in the upcoming World's Finest. This is the blog entry that accompanied the Jim Lee sketch:

Coming in May, DC COMICS-THE NEW 52 “Second Wave” will literally expand the world-building efforts of the comprehensive publishing initiative. With the addition of a parallel Earth that features prominently into both EARTH 2 and WORLDS’ FINEST, the developing narrative will encompass new heroes from distinctly different backgrounds, building on the shared universe in some surprising ways.

“Who will Batman kill to save his own daughter?” asks EARTH 2 editor Pat McCallum. “Right out of the gate that should tell you we’re dealing with a different kind of Dark Knight here. More ruthless, dangerous…the costume is familiar and yeah, there is a Wayne under the mask, but we’re looking at a man desperate to save the only family he has left. EARTH 2 is about to become a very bad place to be a bad guy.”

So they aren't saying this Bruce Wayne, just that there is "a Wayne" under the mask. Honestly I don't care which Wayne it is. We've seen Thomas Wayne as the Dark Knight and I know Damian would be an exciting choice. And if its Bruce, I'd be surprised but I'd be alright with that too. The Batman concept is fun to read no matter who is under that cloak. And Jim Lee came up with a strong design here. I've ranged from lukewarm to totally hating the designs he's created for DC Heroes in this revamp, but this costume is cool, even if it has the high collar. 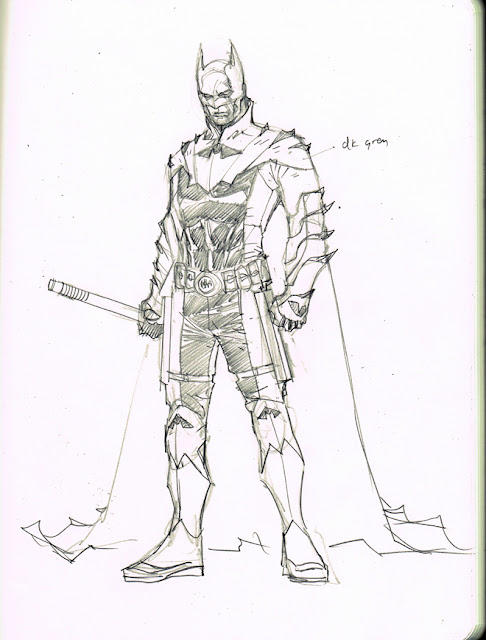