What would a New Year be with out some sort of retrospective list from the past year. I will carry on with this tradition by reflecting on a few comics that I enjoyed in 2011. 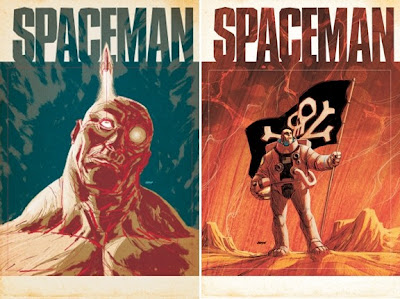 This is a late entry as I just got caught up with this series the last week going into the New Year. On the recommendation of my local comic book shopkeep, John Shine at Beyond Comics, I picked up the first three issues of this nine part series from the Vertigo imprint of DC Comics. I'm loving every moment of it so far. Our hero Orson is the product of a defunct NASA project to breed a specific kind of human for a mission to Mars. This genetic tampering and the raising these future astronauts from childhood was controversial at the time. The program was scrapped and the "Spaceman" children were dispersed, being put into the foster care system, some dumped into orphanages.

Fast foward 30 years later, Orson is getting by selling scrap metal that he finds in the local waters using his skimmer. However he happens upon and ends up rescuing a kidnapped reality tv star and things just get more interesting from there.

Amazing artwork, great characters, and I storyline that I'm enjoying immensely. Please pick these up while its still easy to grab the back issues. The first issue only cost $1!!. So don't wait for the trade paperback on this one. 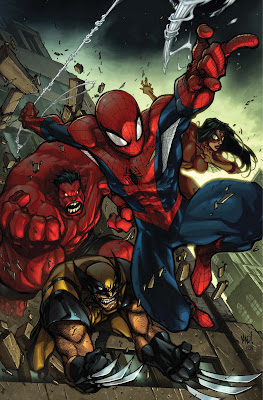 I started reading comic books in the early 1980's. I was introduced to comics through old Marvel, DC and Harvey comics from the 70's. My love of the old Marvel Team-Up and Marvel Two in One books has been everlasting. I still read the old issues in my collection from time to time. The Avenging Spider-Man gives back some of that old Marvel Team Up feeling. The first two issues with the Red Hulk and Spider-Man teaming up has been awesome, for the lack of a better word. I don't know how long this creative team will stay onboard, however I'm enjoying the ride while it lasts. I pray the talent level will continue on this level for future teams put on this book. The Marvel universe has only gotten more colorful and diverse, the time is long overdue for Spidey to get a new team-up book. 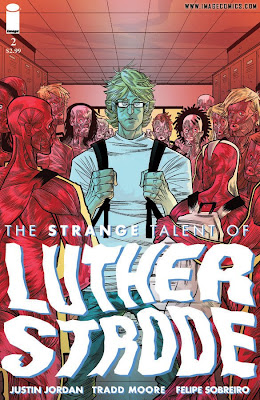 Just when I though I might be burning out on ultra-violent comic books, I found this Luthor Strode. It turns out I just hadn't found an ultra-violent comic with a storyline I liked last year until this book came across my desk. This is a case of a wimpy geek bulking up via a Charles Atlas style ad in a comic book to Nth degree. Luthor Strode through his training has become an outright force of violence and power. It's a great tale of a teenager adjusting to his new found abilities and strength while at the same time there is another violent world running parallel to his that will be colliding with his life soon enough.

The dialog between characters in this book is fun to read and the artwork is very detailed while at the same time being stylized so that is enjoyable comic art and not a series of photo references and poses. This is a talented group of guys whose work I wasn't familiar with, but I will be looking for their names beyond the lifetime of this book. They already have a new fan in me. 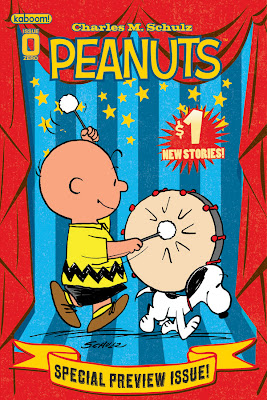 A major victory for all-ages fans of comic books. Boom! Studios has done so much for the all-ages comic book set already with their quality work in bringing back Disney comics and the Muppets. Now Boom Studios is bringing Charlie Brown and the Gang to the comic books stands. With a blend of new and reprinted works. I'm a long, long, long time fan of Peanuts ever since my Dad "lent" me a copy of his collected Peanuts strips hardcover book when I was a little kid.

Happiness is a Warm Blanket, Charlie Brown was the opening act with Boom bringing Peanuts to print, and has lead to a monthly series which has just started up. Peanuts has broad appeal and is truly a book for all ages. It's such a great palate cleanser after some of the dark and intense fare to found in print out there right now. Boom has handled this property with same level of respect and care that they've shown the other properties under their brand, putting out some real quality material. Please don't over look this work. 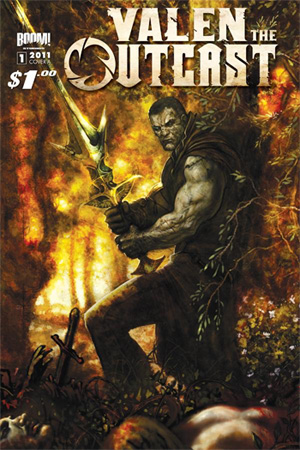 For the record I love the idea of first issues of new series being only a dollar. What a great way to introduce your work and at the same time reduce the risk and return ratio for the buyer. Valen the Outcast is a comic I would have paid the full 2.99-3.99 price even thought it was priced at a buck. This is the story of a king who was killed in battle and the world that has risen after his passing. Except here is the twist... the former king is still alive as an undead warrior who is currently searching for the Necromancer who has his soul.

Watching this character interact with his former subjects and battle his way through this world with this title and humanity stripped is a great turn on the typical sword and sorcery storyline. The first issue was jam packed with great story telling and fantastic artwork. I'm looking forward to the future issues more than many other books I'm reading right now. As with a lot on this list, this book is offering something new and different that you can't find in other books right now.