I just received notice from BOOM! Studios that they will be publishing the a new hardcover graphic novel called TANPOPO written and all artwork done by the incredibly talented artist Camilla d' Errico. This is another amazing project to come from BOOM! that I personally will be picking up when it comes out in a couple months. To have a whole book telling a story in a world created by d' Errico just sounds amazing. For those unfamiliar with Camilla d' Errico's artwork need to do an image search now on your search engine of choice. Below is the press release from BOOM! offering more details. 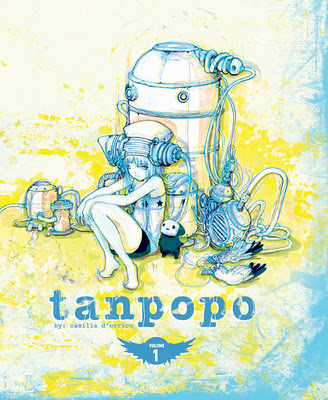 This stunning visual journey combines stories of old with Camilla d'Errico's unique artistic style. TANPOPO brings to life the story of a mysterious young girl, Tanpopo, who takes a journey to experience true emotion. The story of Tanpopo is inspired and narrated by passages from classic literature and poetry. The words and images are woven together, telling Tanpopo’s story as she is guided by the Faustian devil, Kuro, on her journey into the world of humanity and what it means to feel.

The chapters in this volume are reflective of Goethe’s Faust, Samuel L. Coleridge’s Rhyme of the Ancient Mariner, and Psu Sung Ling’s Strange Stories From a Chinese Studio. The result is a text that dances hand-in-hand with d’Errico’s ethereal artwork; manga and poetry fused to create its own unique beauty.

“TANPOPO is a completely new type of book,” says Matt Gagnon, Editor-in-Chief of BOOM! Studios. “It is a new graphic novel experience that combines an Camilla's unique aesthetic in both the storytelling format and character development. We're combining classic literature with her ephemeral art.”
“I love teaming up with creators like this,” says Ross Richie, Founder and Chief Executive Officer of BOOM! Studios. “We used Kickstarter in a new way to bring the public comics that they might never see otherwise. Camilla d'Errico's work is both lovely and literary. We are proud to bring books like this into the market."

Tanpopo (the Japanese word for Dandelion) is superhumanly intelligent and inhumanly emotionless. Attached to a mysterious machine, she is ruled by her mind and vast knowledge. But one day, her heart rises up to struggle against her ruling mind. Torn and confused, she now seeks her humanity, longing to feel what other humans feel.

Kuro, disguising himself as The Poodle, hears Tanpopo's lamentations, and promises her that she can experience all human emotions, especially love and happiness. Alas, this kind of offer doesn’t come without a price … Kuro is The Devil in disguise, and he is after Tanpopo’s Soul. The series follows Tanpopo’s journey into the human world, as she is confronted with the reality of life and death. As she goes out into the world, she meets a variety of characters and is plunged into challenging obstacles.

TANPOPO, written and drawn by Camilla d'Errico, will ship this March. This title features the first 3 chapters of her self-published work as well as an all new chapter that finishes this volume for a total of 176 pages of story. This book carries a price point of $24.99 with a Diamond Code of JAN120963.