DARK HORSE ANNOUNCES FIVE NEW B.P.R.D. TITLES THAT WILL SHAKE THE ORGANIZATION TO ITS VERY CORE! 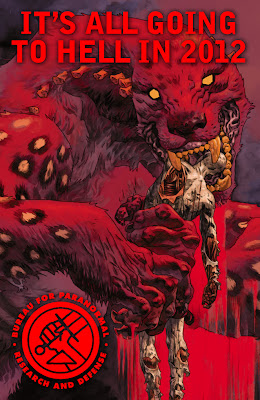 NOVEMBER 21, MILWAUKIE, OR—The epic story line that began back in 2010 with B.P.R.D. Hell on Earth: New World is coming to a head in 2012. Dark Horse announces the most ambitious B.P.R.D. publishing schedule yet, with five new titles and some of the most earth-shattering events in the history of the series!

First up, in February comes B.P.R.D. Hell on Earth: The Long Death, written by Mike Mignola and John Arcudi, with art by James Harren (Abe Sapien: The Devil Does Not Jest, Heralds). A team is sent to the deadly woods from New World to investigate a new series of disappearances, but they discover more than just the monster responsible, as loyalties are questioned and tensions mount!

March will see the release of B.P.R.D. Hell on Earth: The Pickens County Horror, written by Mike Mignola and Scott Allie, with art by Jason Latour (Wolverine, Scalped) and an all-new cover by Becky Cloonan! This chilling two-issue series brings a B.P.R.D. crew into the grips of a backwoods vampire clan hiding out in a Gothic southern home.

Next, in May comes B.P.R.D. Hell on Earth­: The Transformation of J. H. O’Donnell, pairing Mike Mignola with Scott Allie again for the discovery of what drove the Bureau’s expert on ancient foes to near madness after a mission with Hellboy twenty-four years earlier. This supernatural thrill ride features art by B.P.R.D. newcomer Max Fiumara (Amazing Spider-Man) and a cover by Becky Cloonan.

That same month features the return of the regular B.P.R.D. team of Mike Mignola, John Arcudi, and Tyler Crook, with B.P.R.D. Hell on Earth: The Devil’s Engine. The Zinco Corporation again rears its ugly head after a devastating earthquake, pitting Devon and Fenix in an uneasy alliance against bat-faced monsters and the evil empire’s other mad-science experiments! Additionally, this new series will feature covers by former Hellboyartist Duncan Fegredo!

Finally, Cameron Stewart returns to the B.P.R.D. universe in June with B.P.R.D. Hell on Earth­: Exorcism! In this story we learn more about Ashley Strode’s evolution as an agent after she meets up with a familiar face for a series of exorcisms in a rural Indiana town. Mike Mignola and Cameron Stewart team up to share writing duties, with pencils by Cameron and covers by Viktor Kalvachev!

“Let’s break some stuff that can’t be fixed. Let’s turn some corners where there’s no going back” said Mike Mignola. “In both Hellboy andB.P.R.D., we’re saying, “Well, once we do this—once we round this corner—that’s it!” It’s not like, “Oh, Batman, different costume.” We’re doing stuff where there’s no way to fix it. That is the new reality in our world. You're REALLY going to see that in 2012.”

B.P.R.D. is sure to be the most-talked-about series of the coming year, as the team stands at the brink of the end of the organization and the world itself!