Whether you a RPG player who is looking for some decent deals or you know a fan of RPG and would like to get them something special this season, there are good deals to be had out there. Now to clarify the RPGs that I'm talking about aren't your Final Fantasy video game RPGs, I'm talking about the original pencil, paper, dice, and books kinda roleplaying games that are still going strong out there.

Dungeons & Dragons
Dungeon & Dragons is often consider the grandfather of RPGs, its continued to evolve with the times but never lost its standing as one of the top games. A few years ago, the rules for this game were modified and re-written to make the game more accessible. This was considered a controversial move by some, but the 4th Edition rules have continued on. Maybe its time for the gamer in your life to upgrade to the 4th edition rules, if so then the Dungeons and Dragons Core Rulebook Gift Set, 4th Edition

is probably a great choice. Amazon currently has the set marked down 37% for $66.12.

If they are already well into D&D, then the latest supplement, Heroes of the Feywild

, would be a nice little gift to help extend their gaming campaign or start a new one. Its currently going for $19.77 on Amazon which is 10 bucks off regular price. The book offers new character options, new creatures and more details on the Fey world. 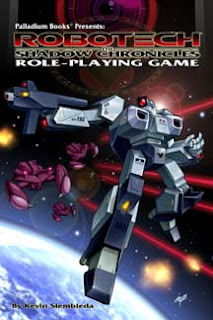 Though I've dabbled with Dungeons & Dragons and other games, in my heart I'm a devotee to the Megaverse created by Kevin Siembieda and the talented creators at Palladium Books. Palladium Books publishes a wide variety of RPG's with themes revolving around sci-fi, sword & sorcery, horror, cyberpunk, superheroes, mutant animals AND they currently publish the Robotech Roleplaying Game. Many of their games are entwined in a shared Megaverse, the character creation and basic game rules are the same through out all of Palladium's games, so its possible to take a character you've played in one game and bring it into another. The game RIFTS which many would argue is the center piece of the Palladium megaverse lends itself most to this kind of  "crossover" gaming.

Every year for over 10 years now Palladium Books offers a Christmas Surprise Package this time of year, where you give them a wish list and they will fill a box worth over twice what you paid in, full of game books and merchandise. I've done this a few times in the past and received some amazing stuff. Signed books, hardcover  game books, t-shirts, artwork, its always been a great deal. For gamers new and old, its an awesome way to update your RPG collection or try something new. I can't recommend this deal enough, for the 2011 season price of $38.00 you will receive a box of merchandise worth $80-$90 or even more.  Please check it out.