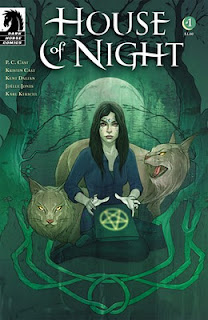 Right from the get go I'm going to go on the record that I'm not a vampire fan. Don't get me wrong I not against them, I just don't elevate them above other supernatural creatures or "monsters". I watch True Blood regularly, I'm familiar with the Dracula and a few of his comic book incarnations, I have a surface familiarity with Anne Rice's Lestat character and some of those novels from my wife's library, and I've been forced to watch a couple of the Twilight movies (holy Moses, those movies are tough to stay awake through). Those for the most part make up my knowledge and exposure to vampires and their lore. So when I'm given a preview copy of House of Night by Dark Horse to review, being told its a vampire book based off a series of popular novels, I'm coming to the party with a set of expectations and honestly I'm not overly excited but I dive in anyway.

When I closed this first issue after reading it through, I had to read it again to get all the details and I wanted to know more about this world. P.C. Cast and her daughter Kristen Cast have created such a different and refreshingly original approach to vampires or "vampyre" as its spelled in the book that I wanted to read more from them.  I can see now why their books have sold so well and been on the New York Times Bestsellers list.

Forgive me fans of this novel series, for my only exposure to this "world" is this comic book that I'm reviewing. The main character is young woman named Zoey Redbird. She's a high-school student who has recently been marked as a vampyre and as a result now has to attend a vampyre academy called the House of Night. Through the dialog between the characters much of the story preceding this issue, that I'm assuming was covered in the novels, is filled in for us comic book readers. So the comic book doesn't go with Zoey through her discovery of her true nature or her first days at the academy, this isn't an origin story by any means. We are dropped down into a story that is already in progress, which I'm fine with especially in the way its handled.

I'm sure some of the retread dialog between the characters at the beginning of the book might be causing some quick page turns for those familiar with the series, but for those of us who are new to this world its a welcome way to get us up to speed.

In this world vampyre's also have use of elemental magic and their blood drinking is done after receiving permission from their source. Both interesting takes on vampyres, its refreshing not to have vampyres depicted as haughty, blood suckers with superiority complexes. But I won't delve into all the storyline and variances in how these vampyres are depicted though, readers can enjoy that themselves. Overall what I found great about this book is the presence of a strong female protagonist, something that is very welcome and needed in comic books. There is a strong female lead in one of the sub-stories as well in this issue. While there is some good action in this book there is also a great deal of good character interaction and enough background information to hook in new readers such as myself.

If the comic book industry wants to appeal to a wider audience of readers and bring in more female readers without alienating male readership. This is the kind of book they need to keep bringing to the table. I enjoyed this thoroughly, its not often that I'm so pleasantly surprised by a book. Put aside your preconceptions about what a vampire book is supposed to be and enjoy the House of Night. Its available both in print and digitally.