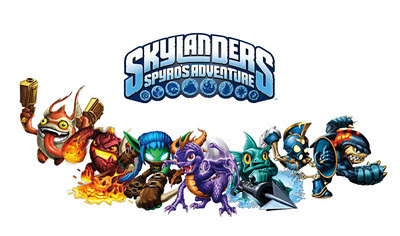 Skylanders: Spyro's Adventure despite the name really isn't a continuation or sequel to any of the previous Spyro titles. This game can easily be played without ever playing as Spyro. I think the character's name was just used in this project to give it a level of interest right of the shoot.

This new game from Activision is squarely targeted towards kids 6 and up. The game itself is a dungeon crawler. Players act as Portal Masters selecting the Skylander character that they will guide through a variety of worlds picking up treasure, fighting creatures, solving puzzles, and using keys to unlock new areas. This is the best introduction to the dungeon crawler genre you could ask for a young gamer. The characters they play as in the game are selected from one of over 30 figurines that they place on a platform plugged into their console. When the figurine is placed on the platform he instantly shows up in the game ready for action.  The figurines also retain the stats including skill levels, life meter, special items, etc from the last time they were played. Spyro and two other character figurines come with the initial game package along with the game disc and the "magic portal" platform. The figures are compatible across console platforms, and they can be used on the PC at the Skylander website to play mini-games featuring the charter in the figu

The variety and collectiblity  of the characters pulls kids in, but the high quality in graphics, well-designed c, voice acting and gameplay keep them locked in on the game. My son (who I've watched play this game for awhile now) is solidly a fan of driving games, I'd go so far that is the only kind of game he's ever really liked. But once he was introduced to Skylanders, I haven't seen Need for Speed or Burnout on our screen all week. He bought an additional figurine character and has been using this one character leveling him up to be his strongest creature.

The figurines come in single or 3-packs and each creature is relates to a different element: Fire, Earth, Magic, Tech, Undead, Water and I think that's it. There are also figurine packs that contain adventure extentions which I'm guessing is some code for DLC add-ons.

I'm happy to find that Activision didn't cut corners in creating the game and in its physical accessories. The game itself is well done and entertaining, even though its not exceedingly challenging for a more experienced gamer its hitting its target audience. The story for this game was written by Alec Sokolow and Joel Cohen, Oscar nominated writers for the original Toy Story film. The character designs offer a good amount of variety, I don't see any place so far where one figure mold was used for more than one character. Its nice to see such attention to quality and detail for an all-ages, youth targeted video game.

Definitely buy this if you have a young gamer in the family, honestly I enjoy playing it too and it's doubly fun to have a game I can share with my son. Skylanders Spyro's Adventure