At New York Comic Con 2011 this past weekend the Stan Lee's Kids Universe imprint was launched. The imprint which is a collaboration between 1821 Comics and Stan Lee's Pow! Entertainment will feature books and games with original characters developed for a children's audience. The first five books to be published under this new imprint include: Monsters vs. Kittens by writer/illustrator Dani Jones, Once Upon a Time also by Dani Jones, The Fuzz Posse, Reggie the Veggie Crocodile, and a yet to be titled book involving an animal rock band. These books are slated to hit shelves spring of 2012. 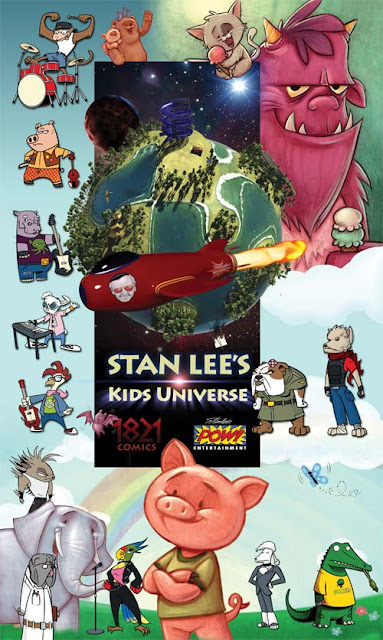 The first game to be published under this imprint will be an iOS game compatible on iPad & iPhones, called Stan Lee Saves The World.

Any new exciting content that brings children into reading books sounds great to me. I'm glad to see companies are seeing that this market has a lot of room to grow still. From the looks of it this collaboration will bring together some very creative and talented people.
Labels: 1821 Comics books children's books nycc 2011 Stan Lee