Yesterday's USA Today ran the first official photo of the Three Stooges from the upcoming effort by the Farrelly Brother's to bring the trio back to the silver screen April 4th, 2012. Will Sasso will be Curly, Sean Hayes as Larry, and Chris Diamantopoulos as Moe. The movie will be a Three Stooges story similar to the old films from back in the day as the boys try to save the orphanage where they grew up. The film will be shot in 3 segments, which I'm guessing will mimic the short films that Stooges used to do. 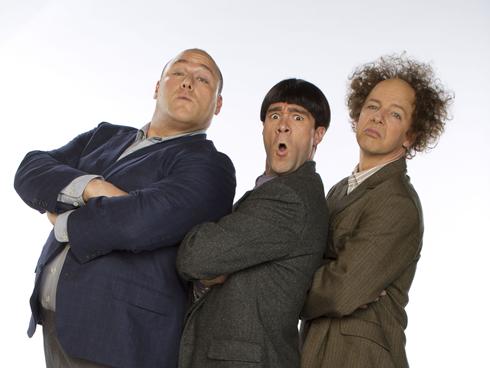 First off I'm happy this isn't a biopic the idea of doing a true Stooges film holds a lot of appeal to me. The Farrelly Brother's have given us some great comedy; Kingpin and There's Something About Mary being my top two... though they aren't funny enough for me to forget the last Farrelly Bros. flick, Hallpass which was one hell of a clunker. This story sounds basic enough that it will give the characters the room they need for Stooge-ish comedy. 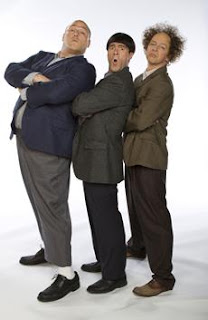 Now for the cast. While this cast isn't the collection of A-Listers that was initially attached to the project (Jim Carrey, Sean Penn, and Benicio del Toro) these three actors are pretty good ringers for the original Stooges in their appearance. A lot of hair and make-up money was saved with the selection of Will Sasso as Curly. Sasso is a funny guy, he's proved that on Mad TV playing a great many roles in that comedy program and he's continued to be one of the funnier bright spots in some forgettable sitcoms. Sean Hayes is also a funny guy, I haven't seen him in as many roles as Sasso but I'm confident in his competence to play the role of Larry. Chris Diamantopoulos has a healthy filmography on IMDB and Wikipedia, but I honestly couldn't pick the guy out of a line up. Based on this photo he looks like a great choice for Moe. The only thing that is a little off with these guys compared to the original Stooges is their height. Sasso comes in at around 6'3" and Sean Hayes is probably just an inch or two under 6' himself. The Stooges were usually shorter then the supporting cast in the old flicks. This is a small nitpick however, and definitely not a show stopper for me.

This photo is a nice tease, but I'm ready to see some video trailers so I can really see how these three perform as the Stooges. I'm a big Stooge fan, I have most of their films and shorts on DVD probably a couple times over in the various sets I own. But I'm trying to keep an open mind and heart in regards to this flick and appreciate it just on its own merits.