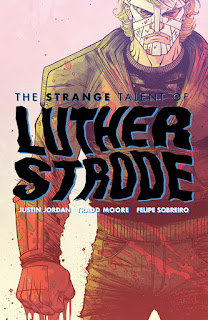 "I can make you a new man by aligning your body, mind and soul!" This was the promise printed in the comic book ad for the Hercules Method training book that Luther Strode sent away for. Tired of being bullied in high school Luther wanted to train to handle himself better, however the results were far beyond anything he could have imagined. Luther discovered he had a strange talent, for sure. This story firmly belongs in the ultra-violent category. There is a lot of gore, some dismemberment, and plenty of no-holds barred violence, almost to the point of being cartoonish. I run hot and cold on ultra-violent books, but I like this story so far.  The main story seems to take place in the past telling us how Luther learned of his talents, we get a brief flash a the start of the book of the present day Luther and all he's capable of.

I'm old enough to remember the outrageous promises in ads that appeared in comic books back in the day. So the basic concept I find hilarious in this story. I'm not familiar with any of the creators on this book, it was strictly the brief synopsis in Previews that had me ready to snatch up this first issue of the limited series. 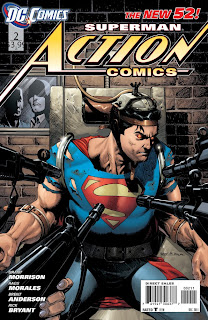 This is my favorite of the new 52 Relaunch titles from DC Comics. This truly feels like a re-imagining of the character without betraying the core of what he is. This issue gives us the first face to face meeting between Lex Luthor and Superman. With Superman in the Luthor's and the US Army's clutches, they are able to run tests on the Kryptonian, essentially attempting to torture him to see what his limits are. Looking at this early "costume" for Superman I almost wish he kept the jeans and boots instead of going to the over designed Jim Lee "armor" costume that he is destined to don in the future. I haven't enjoyed a Superman comic this much since Morrison's All Star Superman series. So I'm soaking it up while it lasts. Fun dialog, great action, love the artwork. 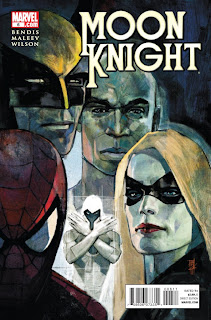 I've been enjoying these series more than I ever though I would. I'm a fan of the Moon Knight character and concept, but I've been lukewarm to his current appearances. This story of Moon Knight trying to take down a West Coast Kingpin who has gotten ahold of Ultron technology is fantastic. Over the past few issues, Moon Knight has had meetings in his deranged head with hallucinations of his Avengers team mates. He's actually dressed as various members of the team and fought as them in their costumes at various times. So throughout this story the Avengers have had a presence even if only in his fevered imagination. In this issue the Avengers finally actually appear to figure out what they hell Marc Spector has been up to and why they haven't been called to help him.  Not much happened in this issue, really but it's been a great story and a consistently enjoyable read.