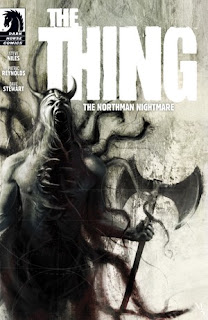 The Thing: This comic is a prequel to the upcoming movie of the same name, due to be released October 14th, 2011. This is the first of three issues that will becoming out weekly. Orchid: This is an 8 page preview of the upcoming comic written by Tom Morello, member of groups Rage Against the Machine, Audioslave and artwork by Scott Hepburn. Here is the how Dark Horse describes this series:

Orchid is the tale of a teenage prostitute who learns that she is more than the role society has imposed upon her. When the seas rose, genetic codes were smashed. Now, human settlements are ringed by a dense wilderness, from which ferocious new animal species prey on the helpless. The high ground belongs to the rich and powerful, who overlook swampland shantytowns from their fortresslike cities. Iron-fisted rule ensures order and allows the wealthy to harvest the poor as slaves.