I Want the Comic Code Authority Back On Marvel & DC Comics

I can't believe I'm thinking it let alone saying it in my blog, but I want the Comic Code Authority reassigned to Marvel and DC comics. Specifically their superhero lines. I came this conclusion after reading Catwoman #1, where I was subjected to the last panel which was just one step away from fanfiction artwork that I'd expect on Deviantart. Okay the idea of Batman and Catwoman as lovers is nothing new and I'm hardly a prude. Jeez, ask anyone who knows me that isn't the case. But I'm a firm believer in the proper place for certain content. As the comic reading public aged somewhere along the way it was decided that superhero comics shouldn't be made for all audiences, that hey should be directed towards more mature audiences, specifically teenagers and adults. I really think this is a wrong turn made by the big two publishers. It is possible to do creative storytelling while still writing for an all ages audience. I'm not saying they need to turn superhero comics into kiddy books. Just keep the sex off-panel, rein in the language. I should be able to hand a Batman comic book to my son with the  confidence that there won't be anything out of line in that book.

When I was a kid there were imprints for mature titles. Vertigo, Epic, these are places you'd go for more mature/adult explorations of the comic book format. And I know these imprints still exist to a degree. But when we have Batman with his pants down with Catwoman writhing in his lap in a mainstream monthly superhero book.. you begin to wonder what's the point? 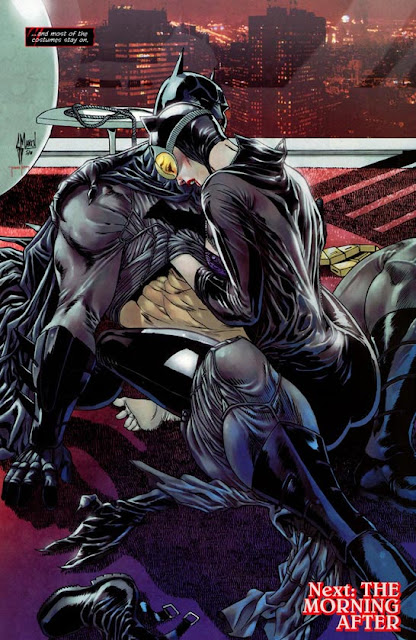 Or there were the trade paperbacks and graphic novels. The Killing Joke is an awesome example of superhero storytelling and because of its subject matter the story wasn't told in monthly book because of the level of violence and nudity. Meanwhile now we have a story like Old Man Logan included in the monthly book, when back in the day that story would never have made it in the monthly Wolverine comic. I loved the Old Man Logan story, but I cringed when I think it was on the stands in the monthly book. Wolverine is on cartoons, t-shirts and lunchboxes. Marvel is marketing this character to kids. His monthly book should be accessible to all ages. If there are storylines that aren't all ages to explore with the character (and there are plenty) then wrap them up in graphic novels or create an adult imprint with the character.


I have a lot of other problems with the current state of comic book storytelling, treatment of women in comics, subject matter and tone.. But I want to keep the point of this piece direct and simple.

Comic companies.. DC, Marvel... Open comic books up to EVERYBODY. Bring the main superhero stories back to an all ages format. I know it was a pain the butt, but if self-administration of this doesn't work.. go back to the CCA.

DC had a great opportunity to do so with the New 52 Relaunch... but it looks like one that is being squandered.