Welcome to the Octopus Tree House

Last weekend at Baltimore Comic Con I was made aware of many talented, creative individuals, and the work they produce. The illustrations from the minds at Octopus Tree House really stuck in my head. I came across their table in Artist Alley that they shared with the a creator group called the Grim Crew who were promoting their book, Dead Future and projects relating to the character Kidthulhu (a character with a great look). After talking with pleasant but brief conversation with Jess Weiss, one half of Octopus Tree House, at the convention I exchanged information and followed up to talk with Jess and Paul Petyo. It turns out that the two series of prints being produced by this duo is a relatively new venture, as the storefront selling the prints online literally just opened up this week. Below is an example of their Star Wars print series followed by a brief interview I had with Paul and Jess. 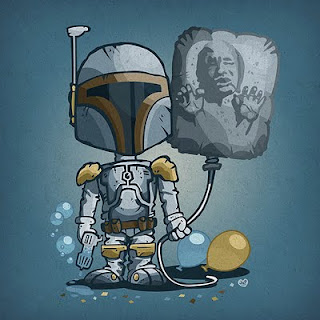 Dr.O: Thanks for taking the time to answer these for me. I'll try to make it quick and painless. I might have a couple follow up questions. I really liked your work when I saw them at Baltimore Comic Con, and I'm especially happy you all are Maryland based. I wanted the first folks I did an article on from the comic con to be local to me. Okay, here are the questions.

Paul: Thanks for the kind words, we're very happy with the response we've gotten from the work.

Dr. O: Who is the artist behind the four current works in the Octopus Tree House storefront?

Paul: We'll The Octopus Tree House is actually two people, Jess and myself, Paul. I consider both of us the artists which is why we sign each piece with the J&P. Jess comes up with the ideas and oversees the creation process while I do the illustrations.

Dr. O: Is the store going to feature other artists in the future?

Paul: Right now we only have plans to release our stuff in the store but we both know that anything can happen in the future, so we're not closing any doors. :)

Dr. O: Will more prints be added to the Star Wars Kid Villains or surreal aquatics themes currently being explored?

Paul: Yes! We have more planned for the series of kids. We're working on a Tusken Raider at the moment that is pretty funny. We probably have about 10 in the our idea bank right now. We're super excited about them. The aquatic stuff too probably. We love tentacled things, hence the name of the store. We also have plans for some other pieces that don't fall into either category. Mostly, if it's cute we're gonna make make it.

Dr. O: How did these themes come about, what media was used to create them?
Paul: Jess is gonna field the first half of this one.

Jess: I'm resisting the urge to go all Stephanie Meyers on you right now. :) But anyways, I woke up one morning and was thinking about if it was possible to make a real-life carbonite balloon and how cool that would be. Then I thought, what if Boba was a kid holding that balloon? After that the entire series almost fell into place instantly, all the ideas just came flooding in. Okay, now the boring Paul stuff.

Paul: I use photoshop to do all the artwork. I sketch everything out with a wacom tablet and then go over everything with the vector pen tool.

Dr. O: Will you be attending anymore conventions or shows this year?

Paul: Indeed, actually we'll be at Intervention Con in September in Rockville MD. http://interventioncon.com/ We'll be there with our friends from http://www.thedeadfuture.com and http://www.tummelvision.com which we also do some things for.

Thanks again to Paul and Jess for taking the time to talk with me. I hope those of you who read this will check out their work and that of their friends. This a group of talented folks.