So a new Spider-Man was revealed this week for Marvel's Ultimate line of comics. In this alternate Marvel Universe where you can have all the fun of your favorite Marvel super heroes being modernized and you can read stories not weighed down by decades upon decades of continuity history. Anyway in this Ultimate Marvel universe Peter Parker the original Spider-Man dies. Taking up the mantle of Spider-Man is young man named Miles Morales, who is half black and half Hispanic, a fact that has gotten a lot of attention in the media. Just as Marvel calculated it would, I'm sure. Hell it was first announced in USA Today (they've been getting a lot exclusive comic book related announcements lately). 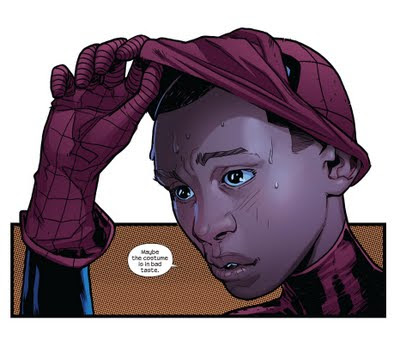 As with any character change the comment boards and forums are lit up with those for and against this change. For many if it isn't Peter Parker under the mask then its not Spider-Man., regardless of race. I personally think that Peter Parker isn't as important a cog in this concept as people make him. The basic premise behind Spider-Man is a young person dealing with the everyday life of a teenager or college student while balancing the responsibility of the great power bestowed upon him. Having someone else deal with this struggle can be interesting and make for some great storytelling. This is true to what the Ultimate line of comics should be in my mind, taking these heroes and concepts we're familiar with  and giving some changes to make new story opportunities that couldn't happen in the main superhero line.

Does it matter much to me as an American of mixed race, this new Spider-Man is an individual of mixed ethnicity. Not really. I mean it makes an interesting headline, and will give the new hero a distinct look over his predecessor. But its not like this an accomplishment of any kind really. In my heart the Ultimate Spider-Man has never been the real Spider-Man anyway. The whole Ultimate universe comes off as a big "What If....?" tale to me. What will matter is how the character is used, if the voice he's given will be true. If this new Spider-Man is more relate-able to a larger cross-section of readers I think that'll be great. The more the merrier.

For those who can't get enough Peter Parker, just got to the other parts of the comic book shelves and pick up the many non-Ultimate titles that feature Peter Parker as Spider-Man. He has two solo books I believe, in addition to being a member of the FF and Avengers. So there is no shortage of good old fashioned Spider-Man. Honestly I don't know how the dude finds the time to be in all those books in the first place.
Labels: Marvel Marvel Comics Spider-man superheroes Ultimate Spider-Man