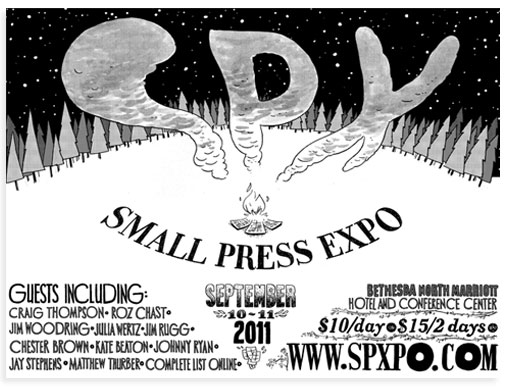 The Small Press Expo is a unique convention that has been hosted in Bethesda, Maryland for quite awhile now. This years expo has the makings of a great one with all the exhibitor space sold out, over 170 tables. For comic book fans looking to see what is going on beyond the wall of marketing noise produced by DC and Marvel comics this is the place. This is also an awesome place for prospective self publishers, illustrators, writers, creators to network and share.
In past years I remember hearing Frank Miller describe some of his research and initial processes for putting together 300. Or receiving advice from veteran independent publishers on the how to get your book published and distributed. Its always been a very friendly and intimate show compared to some of the more overwhelming conventions out there. Exhibitor tables at this show are sold to independent publishers, so this isn't a show floor full of regional comic book shops hawking their wares. I mean that's all well and good at other conventions, but its not what this show is about.
Attendees at the show also get to vote in the Ignatz Awards. The awards are announced at an annual gala held the weekend of the expo, recognizing achievements in cartoons and comics.
Overall its a fun way to spend a weekend or even one day if that's all you can do.
Small Press Expo (SPX 2011)
Bethesda North Marriott Hotel & Conference Center
Time: Saturday 11am - 7pm, Sunday 12noon - 6pm
Admission: $10 for a day, $15 for the weekend
Check out their website for a list of exhibitors and programming information: http://www.spxpo.com/
Labels: Bethesda comic books comic convention conventions independents Maryland self publishing Small Press Expo SPX 2011