During a time where vampires are riding new heights in popularity, Palladium Books is giving renewed attention to the bloodsuckers in their multiverse spanning role-playing game, RIFTS. Last week, Palladium released a newly re-written version of their Vampire Kingdoms world book. Long time RIFTS players will remember the Vampire Kingdoms as one of their first world sourcebooks to come out for the game. This versions official title is Rifts® World Book One: Vampire Kingdoms™, New Revised Edition has alot of new content from writer/creator Kevin Siembieda along with new artwork (but still keeping some of the classic Kevin Long & Tim Truman artwork from the first edition). 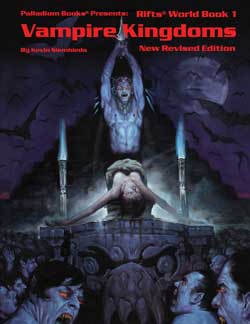 This new version of the world book introduces Vampire Hunter occupational classes, updates the timeline to match events that have occurred in more recent sourcebooks and adventure series along with a total fleshing out of and expansion of the original text from the sounds of it. Here is the official breakdown of features from Palladium:

Already in the works to follow up this book is a Vampire Sourcebook with even more information to use in your Rifts campaign.
For those who aren't familiar with the Palladium gaming system or their gaming worlds, its worth checking out. I know people lock into the system they are most familiar with, but even if you prefer D20 or one of the other gaming systems, the content that Palladium books provides is so rich and can be easily adapted to a system you are comfortable with.
The Rifts World Book One: Vampire Kingdoms, New Revised Edition can be purchased online directly from Palladium or you can find it at a gaming store near you.