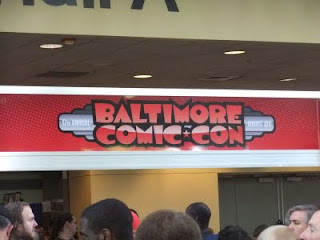 As always I'm going to be honest with you all. I almost didn't go to the Baltimore Comic Con this weekend.  Yeah I had myself all signed up and registered. Viewed the programming schedule and guests, it was looking like an amazing show. But I was worn out from the week, and spending all day doing a conference can really take it out of me. BUT my wife talked me into going, and I'm glad she did because this show was incredible. With all seriousness, I enjoyed the last time I was at this convention a few years ago, but it has gone up to another level. I had an amazing time, met some incredibly talented people, and thoroughly enjoyed the level of participation at this convention. If you live in on the East Coast and you love comics this convention is one you must attend. I was only going to attend one day, but I came back on Sunday. This convention literally energized my creative spirit and made me excited about comic books again.

Baltimore Comic Con is a big deal, and the secret is out from the size of the crowds attendance was high. When I have trouble getting around the expo floor I know its a good sized crowd. What is great is these crowds were here because of comic books and the talent behind them, not to catch a glimpse of a movie star or to snag exclusive movie teaser to put on YouTube later. And these were some serious fans too. I saw so many people clutching their scribbled lists as they went through the bins. And the costumes at these cons get better every year. I don't know what the Diamond sales figures show, but the love of the comic book hobby looked very healthy standing in the middle of this expo floor in Baltimore.

Over this week I will introduce you to some of the folks I met at the conventions along with links to their work. I'll also dedicate an article to the panels that I attended this weekend. Right now I'll take out some highlights from the weekend. 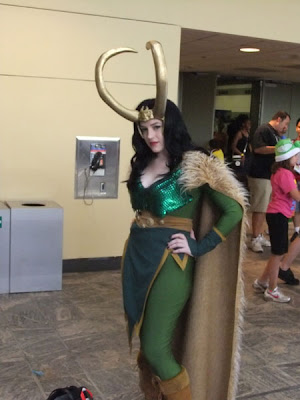 Most Fun Moment: The convention started strong with the Kevin Maguire, Keith Giffen, and JM DeMatteis panel. Being able to hear these three recount their time on the Justice League books  was great fun. You can see why their books are as funny and entertaining at they are after sitting in a room with these guys for an hour. Later on a I got a couple of my JL hardback collections signed by Kevin and J.M. Really cool moment for the fanboy in me.
Scariest Moment: Passing Galactus as I walked into the Mens Room and he was walking out. The Guy DEVOURS PLANETS... I could only imagine what was waiting in that restroom stall after he was done with it...jeepers
Most Memorable Moment: The hour spent at the Stan Lee panel, even with a cold the guy is amazing.
Best Costume: There were so many awesome costumes, so I know the judges for the contest had their work cut out for them. Of the ones I saw, this dude dressed as Optimus Prime was the best in my book. That costume was incredible. I watched him as he had to duck down to fit through the convention center doors. 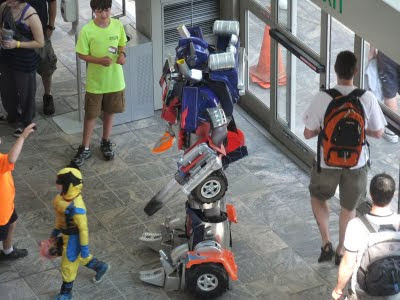 Best Retailer Presence: Beyond Comics of Gaithersburg and Frederick Maryland. Between the glass display shelves and the huge Incredible Hulk statue above their booth. This store really stood out, just a really classy operation by Jon Cohen and his group. Okay so what if this is my local comic book shop honestly their space on the expo floor rocked.

Best Meal: The burgers at the convention center were $9. This was a tough trigger to pull on Saturday. So I skipped lunch and ran on the lousy Egg McMuffin I had scarfed down while trekking up I-95. As the day was coming a close. I stumbled over to the Inner Harbor "mall" and went upstairs to the Five Guys Burgers & Fries joint. Order up a cheese burger with what basically consisted of a large salad for toppings. As hungry and tired as I was, that burger was close to heavenly. I probably ate it way to fast. Amazingly I didn't get a drop of goo on my from that sloppy sandwich.