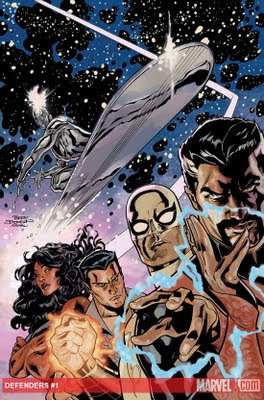 The Defenders are returning as a result of the Fear Itself summer event series, one of Marvel's best teams (in my opinion) returns with a mix of original members and new ones. Matt Fraction is writing, with art by Terry Dodson.  It looks like the Its Either In You or Its Not campaign of posters was a lead up to this new title. Looking at the above cover the roster for the team will be: Red She-Hulk (Betty Banner), Silver Surfer, Namor The Submariner, Iron Fist, and Doctor Strange. No Hulk from the looks of it despite his shape being the lead up campaign. But from the looks of the Hulk titles he's going to be busy enough. More on that later.
Labels: Defenders Dr. Strange Iron Fist Marvel Comics Namor Silver Surfer superheroes