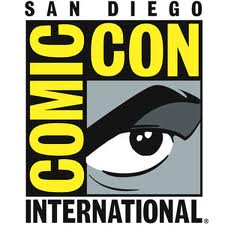 San Diego Comic Con has an amazing amount of programming. When there, please make time in your days itinerary to attend some of these gatherings and panels. Also for some don't underestimate the popularity of the speakers, I suggest giving at least a half hour padding time before its supposed to start. Maybe even more depending. I know this time valuable that could be used to wait in line for some exclusive on the expo floor, but having these down time moments are a good way to break up the pace of the day and it gives you a chance to sit down, look over the loot you've accumulated so far and maybe re-assess whatelse you want to do.


For a convention the size of San Diego, planning is really a must. Going by the seat of your pants can result in you missing out on a lot.


The program Wednesday night and Thursday is now available and can be found here, I'll post the links to the other schedule and point out highlights as time reveals more:

Highlights:
For those talented hopefuls out there Thursday morning Marvel and DC are holding panels on breaking into the industry at their respective companies:

10:15-11:15 Marvel: Breaking into Comics the Marvel Way— You have the talent. You have the imagination. You have the "Go get 'em Tiger" determination that would make the Bullpen proud. But where do you go from there? Discover the next step in your budding comics career with world-renowned talent scout C. B. Cebulski, artists Skottie Young (Ozma of Oz) and Humberto Ramos (Amazing Spider-Man), and Marvel SVP of brand planning & communications Mike Pasciullo, as they give you all the right pointers toward getting a foot in the door at Marvel Comics. Discussing all entry points across every department, this panel is must for all Marvel hopefuls! Room 6DE

10:30-11:30 DC: Talent Search— DC's editorial art director, Mark Chiarello, presents an informative orientation session to explain how DC's Talent Search works and discuss the different needs of DC Comics, Vertigo, and MAD magazine. If you want to learn what DC Comics looks for in artists and how to improve your chances of becoming a working professional, this is the panel for you. If you want to have your work reviewed, attendance at this orientation session is mandatory. (Please note: Not all attendees are guaranteed a one-on-one review.) Room 4

As a big fan of MAD Magazine this panel would be a must see for me. Dick DeBartolo is an amazing personality, this promises to be an entertaining hour:
11:30-12:30 Spotlight on Dick DeBartolo— Comic-Con special guest Dick DeBartolo talks about the bizarre way MAD bought his first piece and the mad way William M. Gaines, founder and publisher, ran MAD (such as white wine in the water cooler and free trips to foreign countries for members of the Usual Gang of Idiots!). He also talks about how, while working at Mark Goodson-Bill Todman Productions, his MAD background saved The Match Game from being canceled. In the Q&A Dick will answer questions about MAD, TV game shows, and his (and Gaines's) love of gadgets. He will not entertain any history, math, or geography questions. In a desperate attempt to get people to attend, Dick will give some MAD stuff away at his presentation.Room 8

And as expected DC will be using these conventions this summer to spread the word on their new line up of titles due in this Autumn, I of course would attend this:
2:00-3:00 DC Comics: The New 52— The DC Universe explodes in September with 52 new number-one issues, and one panel is not enough to cover it, With a "DC Comics: The New 52'" panel each day, there's sure to be something for everyone. Bob Harras, DC's editor-in-chief, and DCU executive editor Eddie Berganza present an up-close look at this unprecedented wave of new series, from the first-ever relaunches of Action Comics and Batman titles to the latest thrills from comics' cutting edge! Room 6DE


Awesome Show, I would eat this up
3:00-4:00 Game of Thrones Panel and Q&A session— Based on the bestselling fantasy book series A Song of Ice and Fire by George R. R. Martin, HBO's Game of Thrones concluded its 10-episode debut season on June 19. The series, executive produced and written by David Benioff and D.B. Weiss, follows kings and queens, knights and renegades, liars and noblemen as they vie for power in a land where summers span decades and winters can last a lifetime. Some of the cast featured in the first season and appearing on this panel are (in alphabetical order) Emilia Clarke as Daenerys Targaryen, Nikolaj Coster-Waldau as Ser Jaime Lannister, Peter Dinklage as Tyrion Lannister, Kit Harington as Jon Snow, and Jason Momoa as Khal Drogo. Moderated by George R. R. Martin, who also serves as a co-executive producer and writer on the series. Ballroom 20


Just look at who is on the panel,  they could be talking about a new encylopedia and I'd show up:
3:15-4:15 DC: Batman— Batman, Robin, Nightwing, Batwoman, and the rest of Gotham City's greatest crimefighters take things to the next level in September with new battles and new titles. Get to know the writers and artists behind these exciting new comics, including Batman group editor Mike Marts, Grant Morrison (Batman Incorporated), David Finch(Batman: The Dark Knight), Scott Snyder (Detective Comics), Peter Tomasi (Batman & Robin), Patrick Gleason (Batman & Robin), Gail Simone (Batgirl), Judd Winick (Batwing, Catwoman), and others answer your questions at this exclusive Bat-panel. Moderated by John Cunningham. Room 6DE