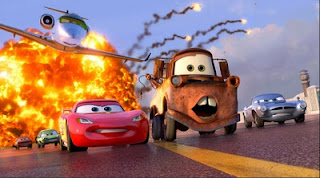 This past Friday I took my son and Father-in-Law to see Cars 2. We rolled in there with about 10 min to spare, so we were left with seats reeeeeeally close to the screen. Who needs 3-D when you can do such a total immersion experience, we were quite happy in our 2D world (note to film-makers, my party of three represents three generations and we all can't stand 3D, so knock it off with the gimmick already).

I missed the trailers and previews getting snacks for the group. With the exception of Winnie the Pooh and The Muppets. Both look promising. I'm especially excited about the Muppets coming back to the big screen. Winnie the Pooh made me a bit nostalgic, remembering when I sat with my Dad watching Pooh Bear in the theaters. But I digress...

CARS 2, KING OF THE BOX OFFICE for the opening weekend. Pixar's record is intact with all their movies achieving this level. But this movie is a different animal from other Pixar films, including the previous Cars movie. The previous Pixar/Disney films have been FAMILY movies. A solid story with characters endearing to kids, humor that sometimes nodded to the adult, but still gave the youngest in the group something to enjoy. The stories often tugged at your heartstrings, making you really care about these collections of 1's & 0's that have been digitally sculpted into a toy cowboy, or a grieving widower on his last adventure or even a lonely robot who has discovered love. This movie has none of that. It's a KID's flick plain and simple. If you've seen the Mater's Tall Tales shorts, this is essentially an extended version of one of those stories with Mater in the roll of Super Spy. Lightening McQueen and the rest of the Radiator Spring gang are secondary to this film that focuses squarely on Mater the Tow Truck.

Now, its a good kids movie. Its gorgeous to look at like any Pixar film. And there are some funny moments  sprinkled here and there that I chuckled at. Honestly, I had more fun and laughed more because my son was eating this movie up. He loved it. His official review is 10 out of 5 stars. So on that level it was worth every cent that we spent on tickets and junk food. However if I'd gone on my own, I would have had a different point of view. The story had the complexity of an episode of Scooby Doo Mysteries and it lacked that moment that you expect in a Pixar movie, that tear or catch in your throat that you gotta fight back.

This movie did its job and it was serving two groups. Kids who wanted to see more Cars, who can't get enough of that crazy Mater and the Disney marketing/sales department who probably are so busy counting the money from all the new Cars merch being sold they could care less how this movie fairing in reviews.

One a total side note, does it bug anyone else that Mater's voice credit is to Larry the Cable Guy, which is the name of another character performed by comedian Dan Whitney?? I mean that's a couple of layers going there. A character providing the voice for another character. Where has Dan Whitney gone? Has the Larry persona taken over entirely? I dunno just bugs me.
2.5 out of 5 Rusted Hubcaps
Labels: Cars Dan Whitney Disney Larry the Cable Guy Mater Owen Wilson Pixar