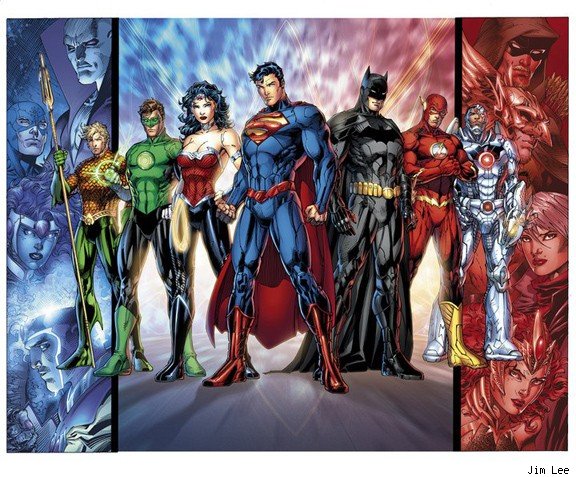 Toon Tumblers is selling an exclusive Justice League glass at San Diego Comic con this year. The above artwork was included in some of the publicity for the product. Now those who have been following the relaunch are probably thinking, BFD we've seen these seven characters on the cover for the book coming out in August. And I'd say you are exactly right, HOWEVER what's up with all these images on either side of our main team. Are these future members or potentially secondary members that will be filling the ranks when the top 7 aren't available. I dunno, it just seems interesting to me. Firestorm, The Atom, Element Woman, Deadman, Green Arrow, Hawkman, Mera and a blonde woman who I'm guessing is the Black Canary.
The image is also good for giving us a better look at these new costumes. Everyone has underwear on the inside now, which is fine by me. I don't know why the Flash has what appear to be metal boots, that seems odd and counter to the needs of the character. High collars are evidentally "in" now in for superheroes in the DC Universe.
So many questions yet to be answered. September can't come soon enough.
Labels: Aquaman Batman comic books Cyborg DC Comics Firestorm Green Arrow Green Lantern Hawkman superheroes Superman The Atom The Flash Wonder Woman