Well its Father's Day 2011. And I actually had some time to read comic books in the week they hit the stands. So here we go with some quick reviews:
Skaar: King of the Savage Land
Issue 4 of 5, Marvel Comics
Writer: Rob Williams
Pencils: Brian Ching
Inks: Rick Ketchum 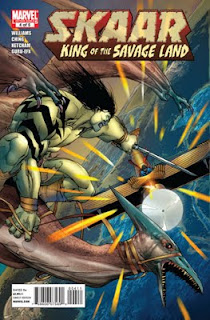 Kid Colt, The Phantom Eagle, Devil Dinosaur, and Kazar all in the same book. I'm in like Flynn. I swear I love the D List characters. The obscure and out-dated are usually my faves and when they are all rolled into together on a book that's as well drawn and written as this than I'm really happy. It doesn't matter how little sense it all makes its just good comic book fun, and that is exactly what this book is.
So in a nutshell, Skaar has been hanging out in the Savage Land with some of the sole survivors of his homeworld. Kazar's wife, Shanna, is under the control of The Designer. The Designer is an ancient alien entity who apparently created the Savage Land. In a short time period the Designer has ousted Ka-Zar and any other "foreigners" in the Savage Land. Skaar and Ka-Zar's son Matthew have found a strange collection of allies an odd dimensional prison.
Ka-Zar in his escape from the Savage Land tribes has found a group of allies including the Phantom Eagle on the icy crusts of Antarctica just beyond the Savage Land's borders.
Commander Steve Rogers after unsuccessful talks with the Designer decides its time to call in the Avengers to take this operation down.
This a fun read, its a shame its not getting more attention with all the Fear Itself going on. If you don't get the comic books, buy this when its eventually collected in trade paperback. Ching and Williams are a great art team, I'm enjoying their artwork immensely. The dinosaurs and jungle look as impressive as they draw Skaar and Ka-Zar, just awesome. Plus the long bearded Kid Colt is a great design on the character.
4 out of 5 Brontosaurus Ribs
Alpha Flight: Fear Itself
Issue 1 of 8, Marvel Comics
Writing: Greg Pak & Fred Van Lente
Pencils: Dale Eaglesham
Inker: Andrew Hennessy 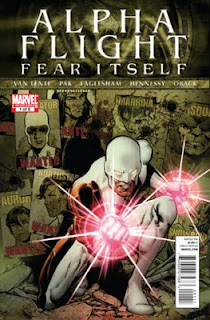 My first exposure to Alpha Flight was issue number 12 of the original John Byrne series. I think it was packaged in a pack of comic books that came as one of the beginner collector sets you could order from the Sears catalog in the 1980's.  I didn't follow the book afterwards, because of a mixture of being late to the storyline and not having a comic book shop at my disposal.
Fast forward the the Chaos War event and we have the members of the original Alpha Flight come back to life to join their surviving comrades (with the unfortunate exception of Puck). Fast forward again now to this series in the Fear Itself event. Where the book opens with Vindicator, Guardian, Aurora, Sasquatch, Snowbird, Shaman, and Marrina fighing Attuma the Atlantean warlord who is one of the "Worthy" known as Nerkkod in service of the Serpent with one of the mystic hammers as his weapon.

I'm a long time fan of Greg Pak and Eaglesham is a more recent fav of mine from his work on the Fantastic Four. The book offers up a good re-introduction to the team, how they relate to one another and some of the new developments in their lives and personalities. If you've never read an Alpha Flight book in your life, this book would be a great way to quickly get up to speed on the team and enjoy a good story.
4.5 out of 5 Maple Leaves
Deadman and the Flying Grayson
Issue 1 of 3, DC Comics
Writing: J.T. Krul
Artist: Mikel Janin 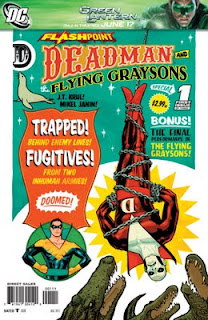 That is an AMAZING cover. Really it should be ranked as one of the best of the year. Its a crying shame that DC screwed it up with that butt ugly Green Lantern movie banner. You'd have to be a combination of blind and deaf not to know that this movie was coming out. A really terrible shame of bad timing I guess.
The story inside is a good one. Taking place in the alternate reality of the Flashpointverse. Boston Brand aka the Deadman is still a circus aerialist and Flying Graysons family of acrobats are fellow performers. Dick Grayson never became Robin and his mother and father remain alive. Also as a part of this circus we have Kent Nelson and his mystical helmet.
The action isn't high, basically we get to know the members of the circus and learn of their plight of being trapped in Europe while a war wages on between Aquaman and Wonder Woman's armies.
At the end of this book we find out that the Helmet of Nabu is an artifact of interest for Wonder Woman's Amazonian army.
I enjoyed the book and I'm looking forward to more to see how it develops.
3.5 out of 5 circus peanuts
Labels: Alpha Flight comic reviews DC Comics Deadman Devil Dinosaur Dr. Fate Ka-Zar Kid Colt Marvel Comics reviews Savage Land Skaar superheroes