Skip to main content
Labels
Posted by droracle May 18, 2011

This September's Labor Day MDA Telethon will be Jerry Lewis' last. This announcement came yesterday Jerry has hosted this 21.5 hour event every Labor Day weekend for the past 45 years, even through some of his own health issues in these later years. The millions that have been raised through the telethon for research is amazing.

I'm sorry to see Jerry leave for a few reasons. I'm guessing with his departure the telethon and its format will be changed if it sticks around. Already for this year they are going to a 6 hour primetime telethon instead of the 21plus hour telethon that I know and love.  The telethon was old style showbiz, it was some of the best live television, and it was just a unique event that I looked forward to every Labor Day. Yeah I enjoyed it for some of the wrong reasons too. I liked waiting to see how far into the show it took Jerry to get really cranky and frustrated. I snickered a bit when Jerry would mangle some of the songs he was struggling to get through. I'm a sucker for live television at the end of the day. Its the same bizarre reason I watch QVC some evenings because I know certain products and host bring out some of the best callers.

Aside from my love of live TV, I also have this fascination with Jerry Lewis. One I don't understand completely. He's unfortunately one of the few left from another era in entertainment. Speaking of other era's in the late 50's thru early 60's DC Comics actually produced a title called "The Adventures of Jerry Lewis", I shit you not. Back in the day, comics about popular comics was something DC loved doing. I know there was a Bob Hope comic too and Don Rickles made it onto the 4 Colored Pages now and then. Either way, here a few covers dug up where Jerry meets some of the DC heavy hitters. 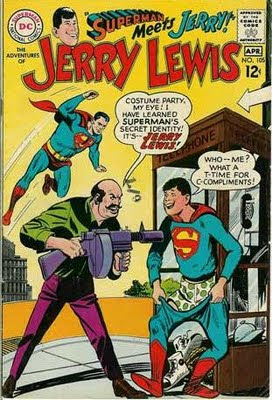 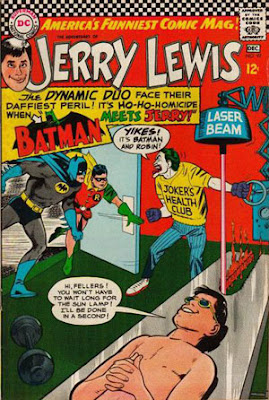