The Dark Knight Returns -- To Be Animated 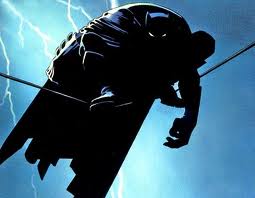 Frank Miller's The Dark Knight Returns is still among my favorite Batman stories and overall comic stories. Though, along with The Watchmen, it helped kick start an era of darker, grittier superhero comic books that I look back upon with mixed feelings its a great book and a must read for anyone with an interest in comics. The animated adaptation of this book will be produced by DC Animated.

While I am happy to hear the Dark Knight Returns will be animated. I have my doubts on how happy I'll be with the finished product. Across the board I've been happy with the animation and artwork style used in the DC DVD's its just the stories often seem incomplete or rushed. Something is always left out that I think should've been left in. All Star Superman left out a great deal from the comic book series, the whole Bizarro storyline for example. The New Frontier DVD left out somethings, but I still enjoyed it a great deal. Maybe DKR will find the balance. The animated version of another Frank Miller penned Batman story, Batman: Year One might give me a clue to the quaility of the Dark Knight. Year One is to be previewed at San Diego Comic-con this year.
Labels: Batman cartoons DC Comics DVD